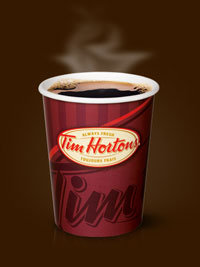 I drink a lot of coffee.

I’m sure I’m not alone in this confession, but I thought I’d make it regardless.

I drink so much in a day that I’ve set a cut-off limit of 5pm, anything later and I increase my chances of having night-terrors. Now, instead of night-time misadventures, I find myself cramming cups in the hour leading up to 5pm, causing me to be a tweaking twitchy mess of a person.

When I first moved to China, up in a small town just outside of Dalian in China’s north-east, it was a hassle to even track down instant coffee that didn’t come in crappy satchels and were made of a powder than never quite dissolved.

I’m not sure if it’s my change in location or China’s breakneck development, but now finding coffee (even proper non-instant grinds) isn’t much of a hassle. However, there’s still something missing – it’s just not Timmies.

Tim Horton’s coffee, for anyone not from Canada (or one of the few US states that have a chain), is a quintessential Canadian coffee/donut shop that holds the unique honour of also working its way into our national identity.

Say “large double double” to any Canadian and they’ll almost assuredly know what you mean.

Alas, unlike Starbucks, there’s not a Tim Horton’s drive-thru for more than 9,000 km (Starbucks has a location about 200m from my apartment). Fortunately, for the last couple years my (true and dear) friend Amanda has made it her Christmas mission to stock my Chinese cupboards with Tim Horton’s coffee via their brew-at-home packets of “authentic” Tim Horton’s blend.

The gesture forced me to bite the bullet and purchase myself a coffee maker a while back – but the results have been lackluster at best. The coffee was alright, but didn’t have that “Timmies” quality.

I blamed my coffeemaker (cheapish Phillips), the water, the milk/cream ratio… nothing seemed to work.

So, I started hunting around and found this interesting post. It claims, from a source deep within the Tim Horton’s echelon of power, that no matter what I do, I’ll never get that Timmies’ taste – as the stuff brewed at the shop contains something my packets don’t.

The secret Tim Horton’s ingredient? Roasted black mustard seed. Apparently you just grind them into the coffee (to taste) and voila! True Timmies at home.

One problem – finding roasted black mustard seeds here might be just as hard as finding a Tim Horton’s drive-thru.

But I’m making it my mission (and Amanda’s generously offered to Santa me some seeds should I not find them by Christmas). If any fellow Canucks have tried this, or try this before me, let me know the results.

Note: other Internet sources, and Tim Horton’s corp, state that this is completely false and that Tim Horton’s has no “secret ingredient”. They state that you just require a commercial coffeemaker that (a) super heats the water, and (b) doesn’t burn the coffee while it’s sitting in the pot (Timmies has a 20-minute freshness rule). Though both of these make sense, additional research online showed people who had bought the “official Tim Horton’s coffeemaker”, and the home brew was still missing something.

I’ve just heard back from Amanda, whose husband rushed out to buy some roasted black mustard seeds, and we have total success!