I was working late on the computer yesterday, and after being quite certain I’d dosed my eyes with a suitable level of radiation, I decided to turn in.

Maggie, having to be up bright and early (oddly, at the same time as myself – but she requires something stupid like 10 hours of sleep), had gone to bed earlier. So it was that as I exited my “office”, out of the air-conditioned comfort and into the dark sauna that is my living room, and I stepped on something soft and …well… squeaky.

Now, I quickly passed it off as just our clumsy dog leaving his toys about, that is until I realized I have no dog – clumsy or otherwise. 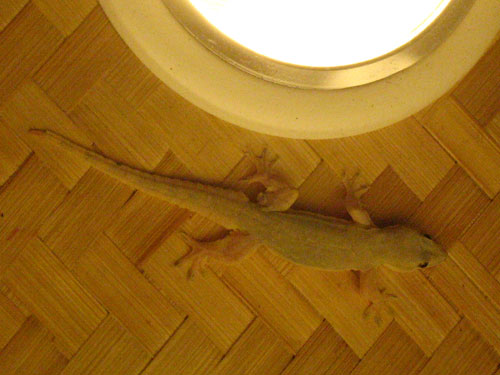 It was then that I looked down and saw a little lizard run (rather, sort of limp) into the office and under my desk. I’m not from places that have lizards, and despite seeing my share of them in the times I’ve spent in Florida and Thailand, it is just damn weird for me to see one in my house – squeaking at me (though I’m willing to excuse this, if I stepped on me, I’d squeak too).

I recently read on Danwei about the Wild Animals of Beijing, and laughed, because other than a good number of birds around my apartment, humans seem pretty much in shared solitude with the cockroaches. But not anymore… apparently Suzhou has lizards.

I tried my best to catch the little guy, but after getting underfoot, he was a little apprehensive about making buddy buddy with me. In the end, I left him to his own devices – figuring maybe he’d do a better job than my mosquito light at getting rid of the bloodsuckers.

We’ll see if he turns up again.