So… today was a bit of a trip. The first day back at school after nearly a week holiday, plus all new classes was bound to make it an interesting event – but ending it with the witnessing of an Irish girl doing some recording sessions with the Chinese military… now that was just bizarre.

I’ve done bugger all with my time off – aside from whinge about how crappy I’ve felt. Whatever that bug was, it really did me and my digestive track in. I’ve nearly recovered – but the hesitation and anxiety have me in a tight and furious grip to not sterilize everything with a combination of bleach and a blow torch.

My new roommate, Emma, arrived the other day – and it’s been cool having someone around. I am a bit worried that I’ve become used to my solitary life and might not enjoy having someone around all the time, but I think I’m pretty adaptable – so it should be alright. Plus, it’s nice to have someone to watch crap Chinese TV with. Though curbing the walking around in my long johns, and not much else, is proving a challenge.

So, today was my first day back at classes. The Spring term classes are generally much larger than my Winter Intensive classes – so it’s taking a bit to get used to and set my class pacing. Out of the 12 students I taught over the past six weeks, I’ve got seven of them in my new classes. In fact, my entire C5 (the KFC crew) class in now in my one C6 class – I adore them though, so I’m happy as can be about it.

Another interesting thing is that I’ve got Serena for four of my classes over the course of the weekend. I don’t think any other teacher has the same Chinese Teacher so many times. I had mentioned off-handedly to Allison, the now-broken Teacher Trainer, that I really liked Serena and thought she was an excellent CT – guess she mentioned (as I sorta hoped she would) this to Sherry. I was a bit worried that Serena might not make the cut in the new semester because there was previously some mention of her English not being good enough – but I had said that it was never a problem with me and that she was an awesome teacher (which she is, I really do think she’s better than any of my other CTs), and viola… she’s now one of the CTs with the most classes. I really did miss her over the break… so it’s nice to see her again.

She’s back in Uni now for art, and as promised she’s asked one of her friends to paint me some Chinese art. She’s also going to bring me down to the school to show me how things are done… I’m hyped!

Anyway… back to Future School. Having nearly my entire schedule squeezed into Satuday and Sunday is a bit different. It’s cool because I do seven or eight hours of teaching/day on the weekend and then get most of the week off. It made for a long day today though. Then I, somewhat on a whim, asked to tag along with a little project our manager Sherry has set up for Emma. Apparently a business was looking for a female voice to do an English recording for some product info and they came to us with it.

As we discovered getting into the jeep piloted by a guy in camo fatigues, the “business” seemed to be the Chinese military. Aparently they’ve developed this AMAZING new nailer/puller device that they’re going to be showing at a Paris expo sometime soon – and they needed an advert recorded in English for it, and Emma fit the bill. The recording was done twice, and for the second time Sherry and I were asked to leave the room – I don’t know if it actually had to do with the fact that I was nearly in tears from laughing, but it would not have surprised me. Honestly, the “script” (and I DO use that term loosely) was just as crazy as most the English translations here. Emma and I both agreed, having read the thing at least three or four times, that we were absolutely no closer to understand what the hell it was that was being talked about.

Anyway… it’s been a day… time to get some sleep.

Oh, here is the one photo I’ve kept forgetting to post: 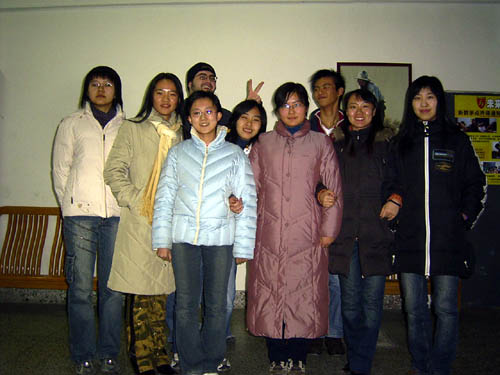