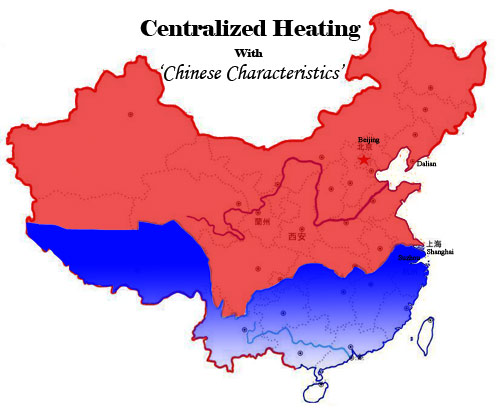 I laughed – laughed! – at the poor fools. Images of a crowd of Chinese standing there on the banks of the Yangtse cursing their northern neighbors who sat toasty warm in their centralized heating watching The Best of CCTV. The shivering swarms swearing generational damning profanity while praying the schizo-aircon unit that worked intermittently throughout the scorching furnace of a summer would now breath new heat into their homes.

This was the short theatric that passed through my brain up in Dalian when I was told that China’s heating system was none-too-scientifically based on geography rather than actual temperatures. Basically, urban centres north of the Chang Jiang are provided with a massive centralized heating system that pipes hot water from local heating stations into the radiators in people’s homes. South of the river… three letters and they rhyme with “less coal hell”.

At the time places like “Shanghai”, “Hangzhou”, “Nanjing” and “Suzhou” seemed the locales of faerie tales … and certainly no places I’d ever end up living. But here I am, joining the ranks of that chilly crowd and practicing my Chinese cursing.

All through the Autumn I reveled in my decision to move down here from the chilly barren north. The steam that rises from my toilet bowl as my body-warmed water mixes with its near-frozen cousin below has me thinking otherwise.

Suzhou reached 0-degrees this morning and my apartment has gone with it. The living room, kitchen and bathroom are all now only-as-absolutely-needed zones – with the lone island of refuge being my somewhat heated bedroom. It’s ‘somewhat heated’ because there is a heater doing its best most hours of the day to make it so. It should be noted that this heater was not-too-long ago also trying (desperately) to produce cold air to beat summer heat, which, if you ask me, is a lot to expect from a cheap Chinese appliance.

The thing that amazes me is that geographically Suzhou is quite far south… think Mexico/California, Texas, North Africa. The climate seems not to care about this at all. Here’s a little chart displaying the average temperature of Suzhou as compared to Toronto and London during the winter months (both of which are considerably more ‘northern’ than this little city of canals and gardens).

It’s true, much of my current discomfort is because I live in a cheap, school-supplied apartment and I’ve already made plans come March (when the lease runs out) to find new digs. However, this doesn’t really account for the complete lack of solid heating technology that one would think might have been made available here. Sure, apartments don’t really cater to massive furnace units, but baseboard heaters are nothing new.

Proper insulation and weather-proofed windows would also go a long way in making sure the heat stays in during the winter and out during the summer… but they are both noticeably absent from every apartment I’ve lived in since coming to China.

Now, I was forewarned about this Suzhou chill-factor in my rather meteorologically optimistic post by a comment from Connie … to me saying there’s no way Suzhou could ever be colder than Dalian she replied that I should ‘hold my toes and wait’… well, I’ve lost touch with my toes, and my figures are likely next. So, please be kind with my spelling in posts from now until March… I may be typing with my nose.