There’s something to be said about the fact that one of my largest fears I’ve had to face in China was missing out on seeing the final Star Wars movie in the theatre. I mean, I’m not one of those card-carrying, first-run doll collecting, travel across America convention going weirdos – but I grew up with Star Wars, it’s hard to take that out of a kid. If they make (and I hear rumours they will) a live-action Transformers movie, you can bet I’ll be at that one too.

Anyway, so yeah, the fear was removed on Thursday when I tracked down a cinema in Dalian playing host to it in English (or as close as Yoda can get to English). The sparkly new cinema in Olympic Square, Wanda Warner, was great, complete with stadium seating, and all that jazz. The Warner characters mingling with the Terracotta Warriors in a giant wall mural was a nice touch as well.

I had met up with Karen and Mandy early in the day for an unsuccessful attempt to get me some new pants and shoes, we then converged with my Newfie (he swore it was alright) friend Justin down at the Square for some dinner and the movie. Justin was a little bit taken back by the zaniness of the girls but quickly learned to adore them as I do. Not a lot of Chinese girls seem to have loads of personality bursting from them, but these two certainly are in no short supply and I love hanging out with them.

After the movie we headed down the road to a cafe and met up with some of Justin’s friends who were gathered to celebrate Tim’s 27th birthday. I didn’t know Tim or anyone else there, but it was cool to sort of crash the end of the party. We stayed to watch the crowd leave and then headed to another bar, adding the birthday boy to our motley group. While we were waiting for Tim to come out of the place we got the treat of watching the stupidest car accident I’ve ever had the misfortune of witnessing (not including my own, of course – they don’t get dumber than that). Outside the bar/cafe place was a taxi hoping one of us would make it worth his while. Aside from him there wasn’t a car to be seen… which made it all the more incredible that this black luxury sedan chose that exact spot to leave the pre-defined lanes of the road.

The car slammed into the rear of the taxi, giving both drivers a bit of a wakeup (and I’m sure a few minor injury claims). We gawked for a bit (more to see if the taxi driver was going to flip out – but I’ve since learned that black luxury sedan often means government… so there’s a good chance the taxi driver took the blame for this one) and then headed down the road to a bar that Justin knew of.

We stayed at the bar far too late and then headed to Justin’s to make use of his spare sleeping facilities as neither the girls nor myself could get home (me due to no trains that late and them because their dorm closes at 10:30 or something silly).

Oh! So, I’m often on the hunt for good Chinglish in public spaces, and leave it to a Chinese construction team to bring it right to my door. For the past couple weeks they’ve been erecting this huge shiny steel wall across the road from my apartment. We had various guesses as to what it might be for, but I admit I didn’t expect a nearly 500m billboard advertising the new Ocean Blue Top City. Best that can be figured is that it’s sort of a combo shopping centre, apartment building, business complex – but really, it’s hard to be sure with these descriptions: 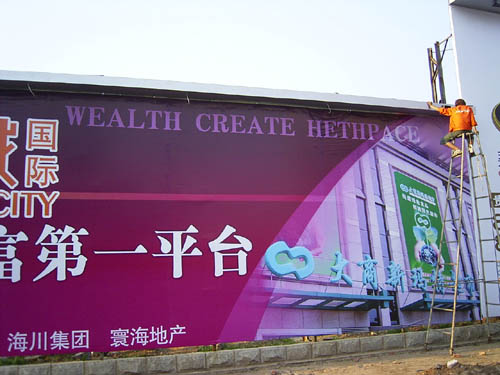 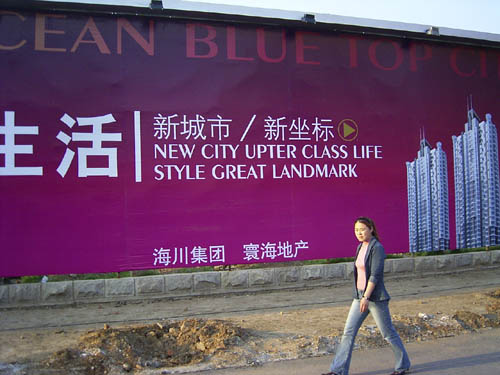 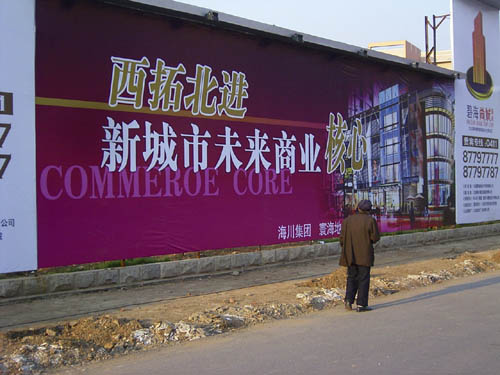 And just a little N.B. – since posting those usage statistics about people landing at my site by searching very bizarre things the amount of people who have stumbled here searching for KTV girls in Shanghai (and various other places) is booming. Even this entry will further perpetuate the google engine’s mis-guided attempts at helping perverts as every time I say Shanghai KTV girl it means a stronger hit count. Anyone in web marketing looking to get traffic, take note.

Oh, it may also be interesting to friends and family from home to note that the readership of this site seems to be steadily growing as I’m getting more and more e-mails from various people who seem to come across it one way or another (cou-KTV girls-gh)