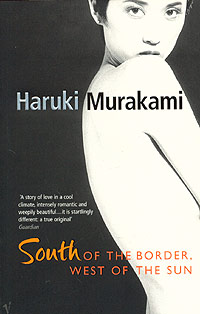 I finished reading South of the Border, West of the Sun this morning. What a fantastic book.

It was loaned to me with high expectations, as Rick touted it as an amazing book from one of his favourite authors. I had heard of Murakami’s Norwegian Wood before, but had not had opportunity to read anything by him until now.

I tend to be very slow to crack new books, and then digest them fiercely if they’re good and sluggishly if they’re crap. I consumed this (tragically short) novel rather quick, and am now thirsty for more of Murakami’s work.

The story follows a 37-year-old Japanese man as he explores the universal themes of love, life and mortality. Though delivered in translation, Murakami’s style is crisp and poetic. The translation suffers from several rather cliched metaphors and idioms, but this – for one reason or another – seems to add to the charm of the book. We’re all a little cliched, aren’t we?

Central to the story is the protagonist’s love for his childhood sweetheart, Shimamoto, whom he lost touch with when he was twelve. Twenty-five years later she reappears in his life and causes him to question everything that is important to him: his loving wife and daughters, his successful night clubs; essentially his life as he knows it.

Though the conflict that Shimamoto brings to the story through his ageless love for her is the backbone of the book, what the novel really delivers is a message that coming of age isn’t something that always happens when you turn 18.

I’ll have to go downtown and see if I can’t find some of Murakami’s other books at the foreign language bookstore.