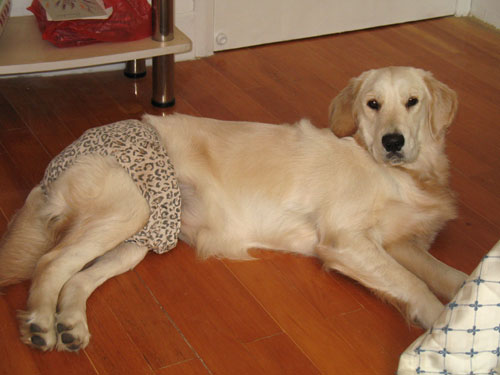 Addie just recently went into heat for the first time (snuck up on us – we were still thinking she was just a puppy). For anyone that’s never had a (ahem) bitch in heat, it can be a bit messy. To combat this we’ve employed a couple pairs of old undies – much to our amusement.

She’s surprisingly good natured about the whole thing and doesn’t seem to pay hardly any attention to her sexy panties. In a week or so when the bleeding stops and the “come get me boys!” starts, we’re betting that might change.

And before anyone starts yelling at us for not having her spayed yet – we completely meant to get her spayed before she ever went into heat, but as mentioned, it totally snuck up on us. We’ve called around and will be taking her to a vet next month.

Should anyone know of a good vet in Suzhou (SIP), please let me know.

And to keep you laughing…

Apologies if the site is acting wonky. I’ve just migrated to a new (Asia-based) server, so things may be a bit up and down until the hiccups pass. Once they do though, speeds should be much improved for all us folks in China.