In a break from tradition (at least from what I hear about Dalian weather habits), it snowed pretty solidly all weekend. It’s fantastic, and has really jump-started my Christmas fever. 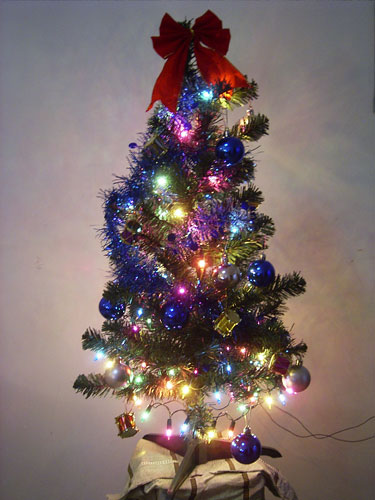 I don’t like to admit it, but I really do love Christmas. Don’t get me wrong, the commercialism and all that crap sucks ass, but it always gives me a warm tingly feeling when I walk into a room lit only by a Christmas tree, and outside there’s a luminescence that only a blanket of snow can give off. Oh, that reminds me, I got a tree!! It’s three feet of festive fun, and I love it!!

The snowfall has caused some problems for a city that doesn’t have a lot of snow-removal facilities. China continually gives me new things to chuckle about, but an army of people out shovelling snow with random pieces of plywood is on my short list for goofiest.

At has also caused problems for some vechicles, namely taxis, whose standard practice seems to be to let their tires get as treadless as possible before replacing them. Most of the tires have a Buddha-like baldness to them, which makes it near impossible to navigate our neighbourhood, which is largely built on the side of a hill.

The slick surfaces have also given Maggie reason to curse the beauty that is winter, as she’s repeatedly bruised her tail-bone; that gravity, she’s a harsh mistress.

Oh, so Dalian now has a second representative from Niagara! Thank god, the pressure is off me. But yeah, Victoria (who recently finished studying at Victoria University, in Victoria, B.C.) arrived about two weeks ago to work at the Future School down town, and I finally got to meet her last night. She seems nice. 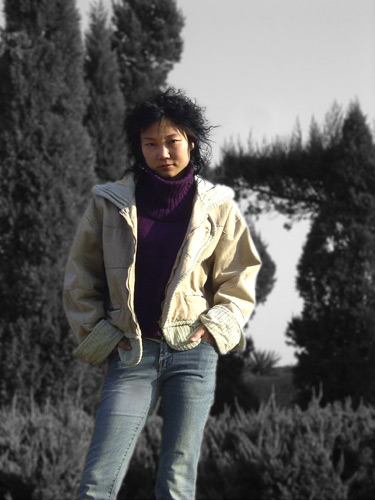 Not having a great camera sucks, but it does force me to get creative in Photoshop. Isn’t my girlfriend beautiful… gawd, sometimes I wake up, roll over and wonder when the hell she’s going to figure out that she’s much too good for me 😉

This photo was taken two weeks ago when we went out to a park not far from our apartment. I was using a tripod to take photos of the two of us, most of which didn’t turn out very good…

The major problem with my little point-and-shoot camera is that I don’t have any aperture control, and can’t do any work with depth-of-field or forced perspective… but with a little creative use of blur tools in Photoshop… I can feel again much like a photographer… gawd I need a new camera.