But you don’t really need long…

Monday Maggie and I took our trip up to Dandong and I think we were both pleasantly surprised by the congeniality of the place. Though I guess Maggie’s disposition is a little slanted, this being the first time she’s really travelled anywhere – and it’s only 4.5 hours away. “They have YELLOW taxis here!” makes me laugh every time I think of it.

From what I had heard from others, I was expecting a shitty little villiage with a few restaurants, a rundown hotel or two and some boats on the river… what I found was very much to the contrary. Though not as big as Dalian by any means, Dandong is a full-on city.

After a rather bumpy bus trip we sorted out where we were staying (a school-provided apartment) and grabbed some lunch. We were both a bit eager to try the Korean food, being so close to the border and all. The food was mamahuhu, but as we learned, damn cheap. Every meal we ate in Dandong came to about half of what you’d pay for it in Dalian. None of it was as good, but it was cheaper. I guess that’s sorta the slogan Dandong could go by. 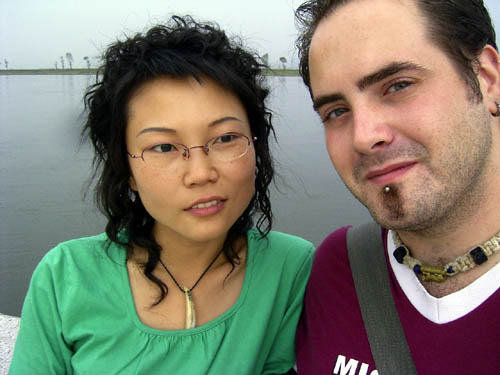 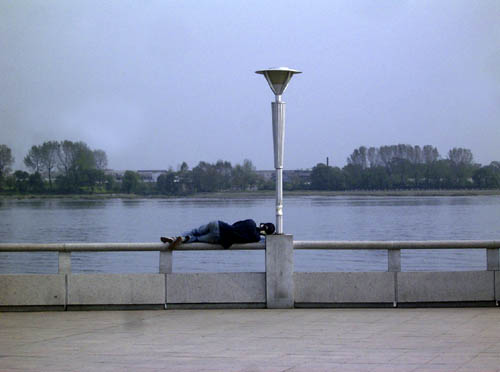 [1] Maggie and I on the Yalu River Promenade. [2] Balanced relaxation.
With the afternoon to kill before I had to do my obligator three hours of teaching we headed down to Ya La Jiang, the river that keeps the North Koreans on one side and the Chinese on the other. The shore of the river has a nice promenade, similar (in a Dandongian fashion) to The Bund in Shanghai, and we lazily walked along it taking photos and checking out the brides getting their photos taken. 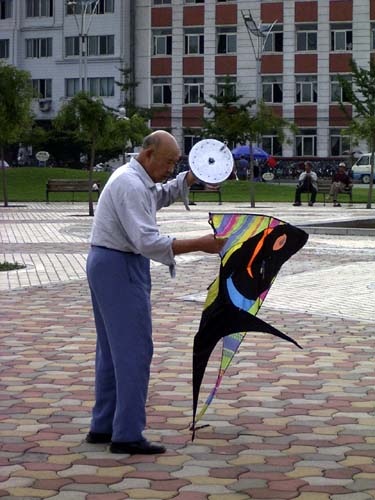 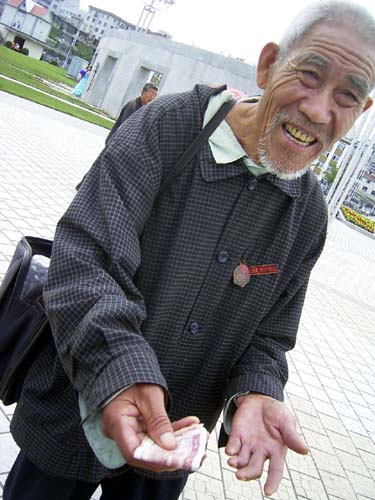 [1] A great place to fly a kite … or hit Lao Wai up for spare change.
Class went well, two 1.5 hour classes with A7 and A6 students. After class Maggie and I hit some hot pot and wandered around the city a bit, calling it an early night as we were both exhausted from a late night out at Noah’s Ark (a cool Dalian bar) the night before celebrating my roommate Ryan’s birthday. 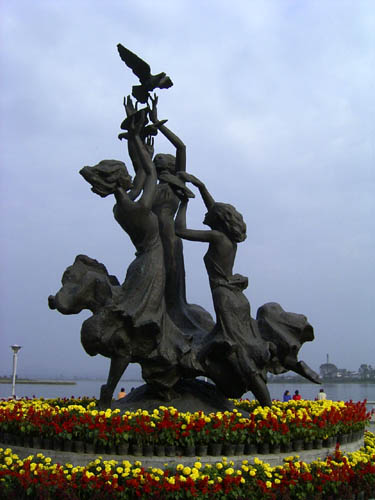 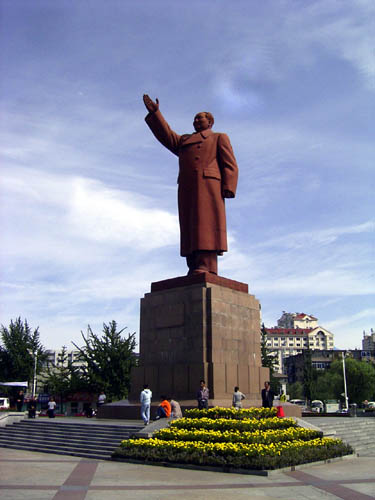 [1] A statue by the river, advocating peace I think – ironically the three girls look remarkably caucasian. [2] What would a city be without Mao greeting you at the train station? The positioning of the statue does give you the sense that he’s telling you to get right back on the train.
Tuesday was the day we had to do it all – thankfully there was not much to do – again, this isn’t exactly Shanghai or Beijing. We took a bus (4 kuai) out to Tiger Mountain (Hu Shan) where the most eastern section of the Great Wall (Chang Cheng) lies. The wall itself is really only a ‘representation’ of what the old wall would have looked like if a good number of centuries hadn’t had their way with it. It’s only about 15 years old and a kilometre long. Essentially you climb the wall up Tiger Mountain and take in the surrounding scenery – which justifies the 40 kuai entrance fee (30 for the wall, 10 for the manditory museum at the other end). It’s a bit weird, after being to the ‘real’ Great Wall that majestically rolls off for untold miles in the distance, to be able to comfortably (like without straining) see both ends of it. 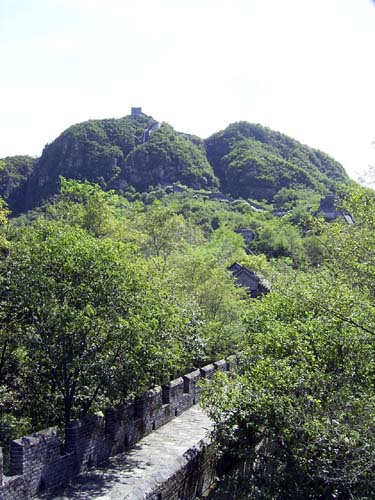 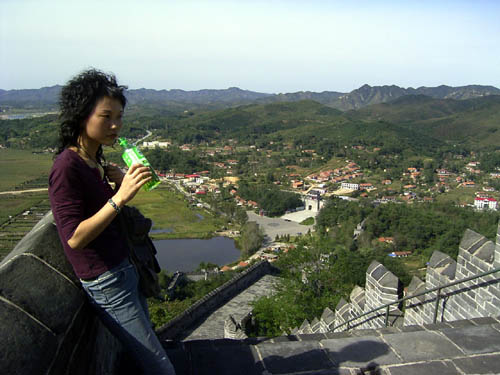 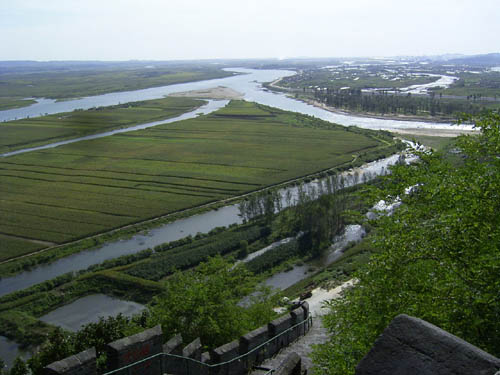 The [not so] Great Wall, the surrounding view. 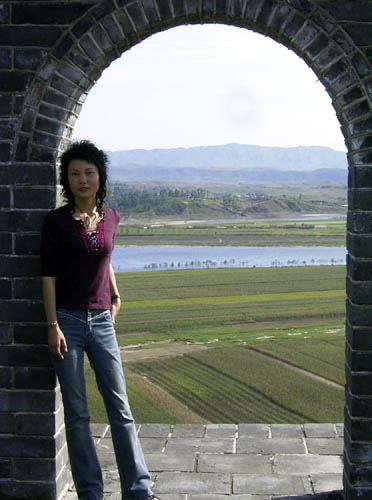 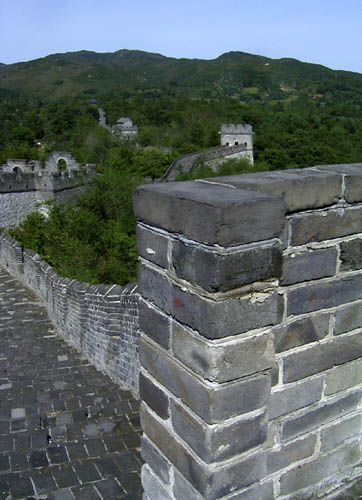 The best bit, in my opinion, of the trip was being so close to another, semi-forbidden, country. After you do the Great Wall you hike around the side of the mountain and are literally a stone’s throw away from North Korea (and men with rifles keeping a VERY close eye on you). 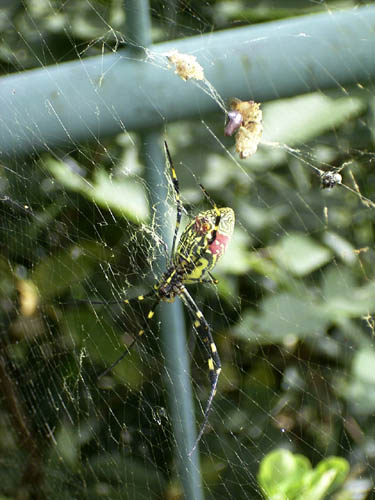 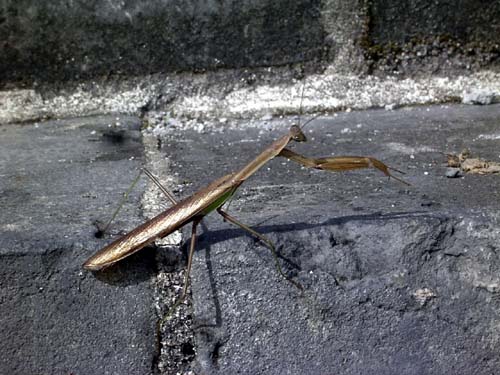 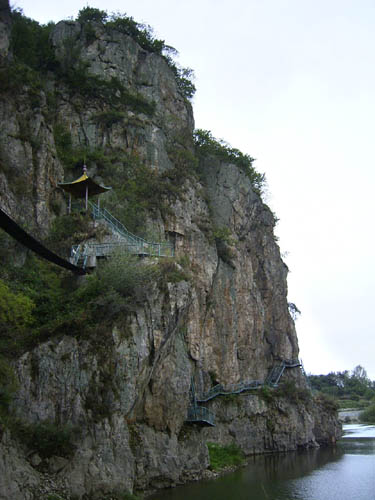 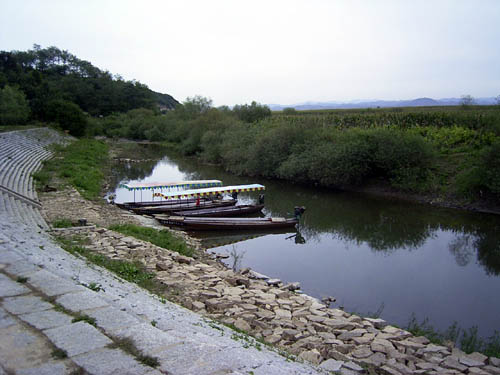 [1] A steep but fun climb around Tiger Mountain. [2] The side with the boats is China, the side with the bushes is North Korea.
We returned to the city and again went down to the river to see about taking a boat ride along the other bank to take a better look at the Koreans. There are a number of boats that will take you out on the river, and the standard fee seems to be 10 kuai in a crowded boat or 30 kuai if there’s no people. Due to it being rather late in the day we had to take the 30 kuai option, but having a big tour boat to ourselves was kind of nice. 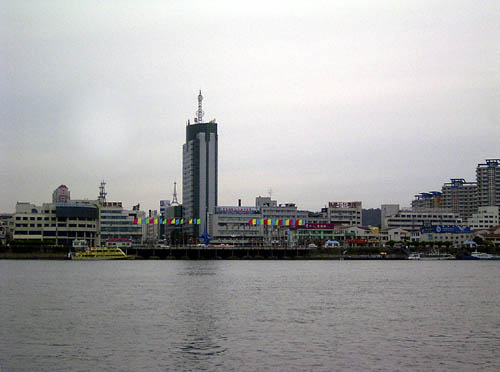 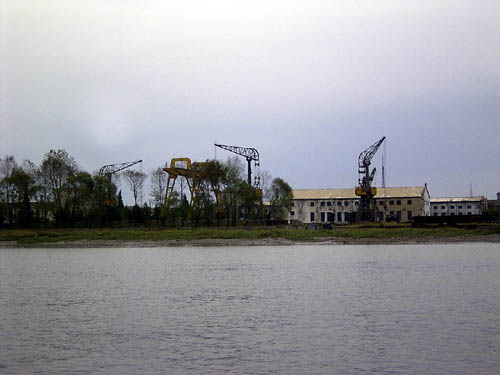 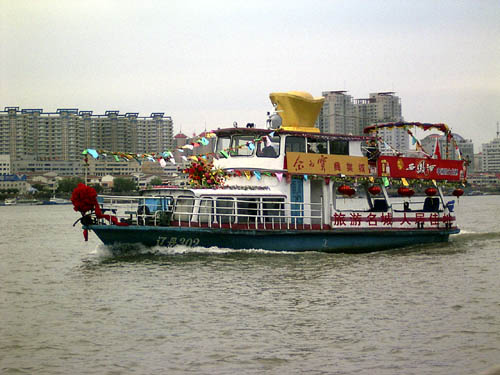 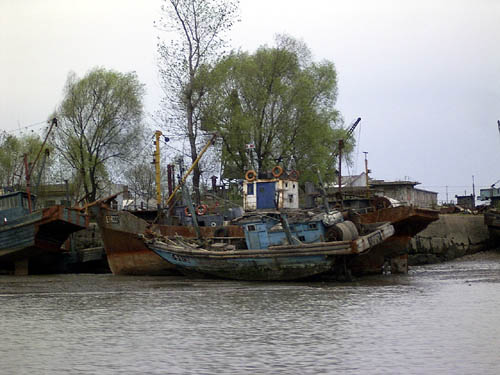 Boat from Dandong – Boat from North Korea
The Chinese and North Korean banks are complete contrasts. Dandong is a big, developed city with a beautiful treed street that runs along the river, the Korean shore is just a collection of old boats, some cranes and a factory. We did see some people fishing, but they only returned my wave with steely stares.

Satisfied we’d seen all there was to see in Dandong, we had some food, crashed and caught the bus first thing in the morning back to Dalian. All in all it was worth the visit, but as everyone I’ve talked to says, it is easily done in a one day, one night trip. 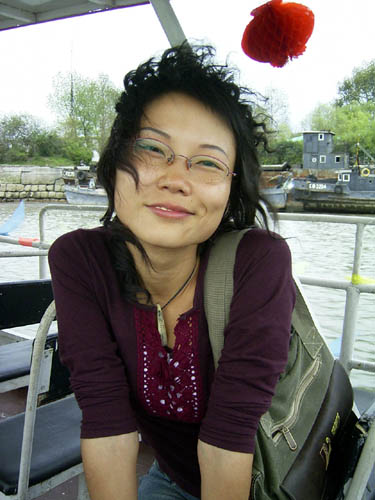 The smile that kept me in China.
Well, I’m going out today to take a look at a new laptop. This one has been acting up lately, and it is a little dated, so I’m considering getting a new one. It’d be nice to have a more powerful machine, but the cost will largely decide whether or not I’m willing to part with the hard earned People’s Money I’ve been saving. I’ve been tossing around the idea of getting a new laptop or a new digital SLR camera… I’m not 100% on either yet, but I think the laptop is a more practical purchase, even if the camera is a bit more coveted.

It’s been strange not having direct Internet access at home, and to be honest, perhaps it is for the best because I’ve not really missed it. I checked my e-mail nearly a week ago and really haven’t been too bothered to go and check it again even though I’m only a block away from the Internet cafe. However, I have finally gotten around to sorting out a number of photos, so feel free to re-browse the following entries for their newly garnished visual appeal:

Shanghai’d
All Thai’d Up
Bye Bye Bangkok
Rain Rain Go Away
Diggin’ The ‘kok
Farang? I’m A Lao Wai Thank You Very Much

Eventually I might get those zoo photos up too…