It’s been a while since I’ve given an update on the puppy, and what better way then to show you all how cute and clever she is.

Addie’s now 3.5 months old, and is growing faster than tension on the [*tib*] plateau. She’s still got another two weeks before her rabies shot and license, so is still pretty much apartment bound, but it’s given us lots of time to start training her.

I’ve never had a puppy before, and all my previous dogs came with tricks (and bad habits) already installed. I take quite a bit of responsibility for training Addie properly as I want her to grow up to be a big slobbering, shedding, smiling angel of a dog. 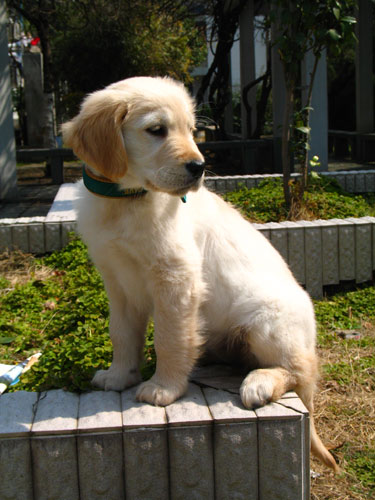 It’s been quite the ride educating myself on proper dog training, and as there’s no English-language obedience school that I know of in Suzhou, it’s pretty much all on me and an intimate relationship with my keyboard. Fortunately, there’s a massive amount of information out there for my consumption.

I’m also very lucky in that little Adobe is sharp as a tack and keen to learn (for a treat at least). Every trick I’ve taught her she had roughly sorted out after about five minutes, and then had it nailed after a few repetitions throughout the day.

As you’ll see in this video, she’s a little confused by the “take a nap” command, but that’s mostly because she’s just learned it – and she sometimes gets it confused with “roll over” as they both always come after the “lie down” command. She also tends to get a bit over eager sometimes and jumps the gun on what I’m going to ask her to do (as you’ll see with the “shake a paw” bit).

All-in-all though, she’s awesome. She’s well-tempered, listens, rarely (if ever) barks, doesn’t chew anything other than her toys and when we leave her for a few hours, she just curls up by the door and waits for us to get back. We’ve not got her well house trained yet, but that’s mostly due to the limits of having a large area we can paper and properly train her. She’ll be starting to go outside this week for the washroom, so hopefully that will improve.