I often touch on, but rarely dedicate entire posts to my country or its inhabitants… but this is just too… too… too I don’t know what to not comment on.

Almost 4 out of 5 Canadians believe in global warming: poll

A new poll suggests most Canadians believe climate change is a reality, but people in various regions hold widely different attitudes â€” with Albertans expressing the most skepticism.

Despite the article expressing mildly positive surprise that so many Canadians are on the global warming bandwagon, this is just insulting. My god. This means that there are 7.4 million people in Canada that are complete fucking morons.

Now I know, by and large, the human race is prone to not believing things until they see it with their own eyes, but I had (apparently wrongly) assumed that there wasn’t a person on the planet that believed the whole global warming thing to be some hoax cooked up by Greenpeace in order to sell t-shirts and solar panels. 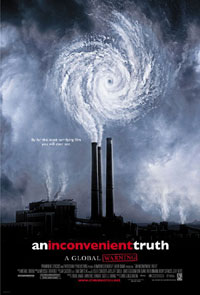 Perhaps 30 years ago I could buy people still holding out on a connection between the sickening amount of emissions we produce and rising global temperatures, hell, I’ll even give them 15 years ago… but in 2007? That’s just nucking futs.

Generally speaking I’d not say that anyone should use a movie to be their sole education on a topic, but as so many of my fellow compatriots seem so utterly confused on the topic I’ll make an exception.

So, if you’ve friends walking around uttering phrases like the following: “Bummer the rink wouldn’t freeze again this year… bah, still not so sure about all that Global Warming malarkey…eh..” please, please ask them to give Al Gore’s An Inconvenient Truth a watch.

Note: Though Gore puts it in terms even these simpleton’s are likely to follow, you may wish to stay in the room with the finger on “pause” just in case.

Gawd, 7.3 million… to put that 23% into perspective, it’s the combined population of Alberta, Manitoba, New Brunswick, Newfoundland/Labrador, Nova Scotia, PEI, and all three Territories. It’s no wonder the government keeps dicking around with meeting their Kyoto commitments – it’s apparently ‘just’ becoming an issue for most Canadians.

Someone should tell them that if the world grows warmer, hockey may lose popularity and they’ll all be forced to watch footie instead.