Well, the last week or so has been a scramble to get the minimal Christmas shopping I need to do done, as well as balancing my over time hours and investigating possible job options for the future… and this week seems like it will be just as busy. Everyone say “Yay” to the holidays.

My friend Justin begins his LONG journey home for the holidays today, and as such we all went out for dinner last night to sort of say goodbye. A newfie, he has to first fly to Beijing, then to Vancouver, and on to Toronto where he hopes he’ll have a direct flight to St. John’s waiting for him. Fun!

We sent him off in style though, complete with very nearly having the police called on us. Maggie and I met up with the group at a hotel-cum-Korean restaurant not far from Justin’s place, and we were later joined by fellow Jin San Jiao teachers Maeve and Cam, who was giving her just-arrived friend from home, Erin, a night out in Dalian. 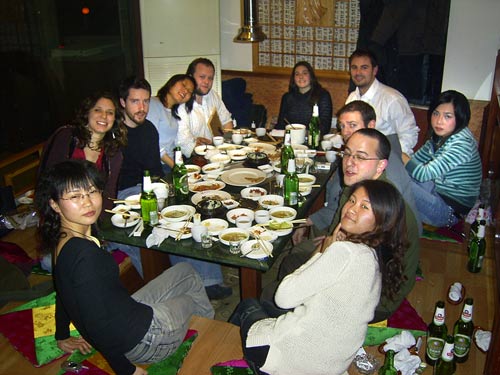 [clockwise-bottom] Maggie, Adria, James, Jane, Justin, Victoria, Corey, Helen, Todd, Michael and Zhou Wei.
After consuming most of the restaurant’s stock of beer and soju (Korean liquor) the staff asked us to leave so they could retire for the night. It was here that a problem we long suspected would surface caught up with us. See, Cam and Maeve, being the rather rowdy (but loveable) just-out-of-uni girls that they are have a predilection for “borrowing” various negligible items from the places we go.

As might be guessed, most of us rather dislike this, and don’t see it for the laugh it is intended as. Foreigners are a small group in Dalian, and what one does effects the lot of us. Plus, what might be worthless or “cheap” to us, does actually have value to Chinese businesses that have margins thinner than an early-90s Kate Moss.

For months we’ve all subtly and not-so-subtly suggested they knock it off as it has the potential of making us all look bad, and such was the case last night. After we settled the bill Corey approached me and said that the staff saw one of the girls pocket something, and we needed to confront them about it. Corey sorted it out with the girls and the staff and things, though fragile, seemed stable. Enter, or rather exit, Adria.

The last of us to leave, she came off the raised Asian-style sitting area where we had been eating, and stepped too far forward on the stone/marble step, causing it to fall forward and break. Could have been anyone, and really was the problem of the restaurant, as it’s a major safety hazard. However, the small truce Corey had established crumbled and they immediately demanded that we pay for it – no less than 500 RMB.

Perhaps not very fair, but the girls had burned any moral ground we had to stand on. Things were made worse by their attempts to defend themselves. Korean backup arrived (I think the staff was a bit worried because we out-numbered them), and threats of calling the cops were made. In the end, despite offers that we all split the cost (something I still really thing is the fair thing for us to do), Adria paid for it with money loaned from Corey.

I’m not really sure how everyone is feeling today… but you could have poked the tension in the air with a chopstick when we said our goodbyes last night. And to top it off I had the sad, and really rather pointless task of arguing what happened with Maeve the whole taxi ride home. Bah. For some reason it’s rather difficult to impress on them that arguing about what is “just” and what is “fair” is just not a concept we are able to do. We are not on native soil, we are guests here.

Meh, I’m over it, but I really dont think Corey or his girlfriend Helen are in any rush to be around Cam and Maeve any time soon – and rightfully so, as Corey had to sort out a situation he really had nothing to do with, and Helen, ethnically Korean, was terribly embarassed by the whole thing.

ANYWAY – I’m sure that much will be talked about it tonight at dinner. It’s Cam’s birthday today and we’re all going out for dinner at a BBQ/buffet. The big question that’s on my (and I’m sure her) mind is who will come. 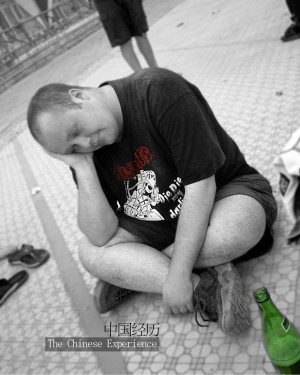 Oh! So, as Justin was heading home and will not be here for Christmas, I gave him a rather hastily made Christmas gift last night to remind him in the Future of what his time in China has been spent doing. A shoddily-framed 8×10 of this (artistically remastered) photo I took of him in the summer.

Oh, and if you’ve got a couple hours to kill – check out Hapland and Hapland 2, two crazy puzzles that require a lot of clicking on things. Frustratingly fun.