Some of you may know my friend Derrick’s blog, Mask of China. Starting out in Dalian back in 2003, it has since followed its master to Hong Kong where it has continued to be a fixture of the Sinosphere.

It was with moist eyes that I heard Derrick (Dezza) was hanging up his blogging cap, despite having seen it coming for a long time, as he constantly told me he was losing interest in writing, and shifting his energies to other creative endeavors – namely, his amazing flare for photography.

However, it was still tough to hear, as his blog was really the first China blog I ever read – and had a lot to do with easing my tensions about moving to China (those that know Derrick, know how great he is about sharing advice). 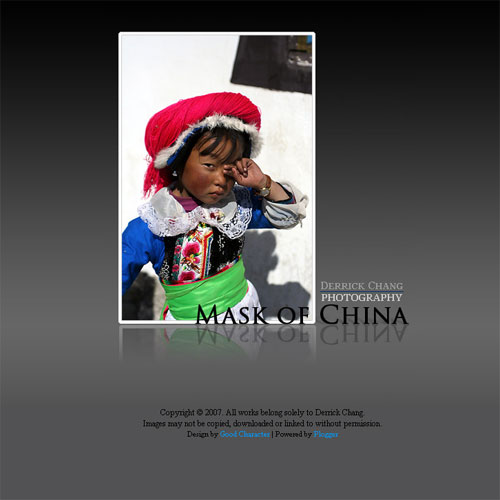 Well, it is with a bit of pride that I announce that www.MaskofChina.com will not be fading gently into the abyss, but has rather (like its owner) just shifted focus. Instead of maintaining the blogs, Derrick has instead converted the site into a showcase of his beautiful photography.

This announcement also works in tandem with me announcing my official transition from ESL teacher to Web designer, as I performed the Mask of China redesign. Though I’d done quite a lot of design work previous to coming to China, it’s really been in setting up my own sites that I’ve really cut my teeth with all that it takes to be a competent Web designer/developer. 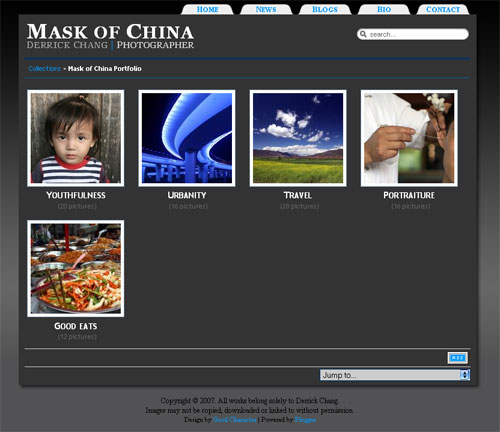 Though my own business identity site isn’t up yet, expect an announcement about it in the coming weeks. And if you, or anyone you know, needs Web design, graphic design, content creation, or editing services, please don’t be shy and throw some love this way.

Oh, and be sure to go on over to Mask of China and tell Derrick how great his photos look (and let him know you like the design as well ;-)). If you should require the services of a professional photographer or would like to purchase prints of any of Derrick’s photos, please feel free to contact him.

If you’d like to beautify your computer with some of Derrick’s photos, they have recently been featured in a screensaver, People of the Middle Kingdom, helping publicize the excellent Library Project.