Well, the cat’s out of the bag. Professor Lonnie B. Hodge, a dear “friend” of mine has outed me and my matchmaker ambitions on his blog.

As he’s helping me get my new Bag A Canuck!™ e-book business off the ground, I figured I should return the favour and officially announce his latest endeavor – Lonnie B. Hodge’s Panda Meat Emporium (site now closed — screenshot here for posterity).

The business specializes in delivering panda meat, or Peef™, to an international market hungry for this rare delicacy. As many know, Lonnie is an award-winning poet. But don’t let his soft exterior fool you, beneath the skin of the SEO expert beats the heart of a hunter. Lonnie is a medal-winning archer, and the only teddy bears he deals with are the kind that go on a plate. 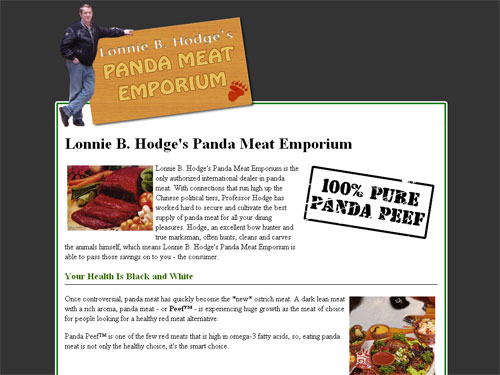 Many of our customers have written in saying that though they thoroughly enjoyed Lonnie B. Hodge’s Panda Meat Emporium’s fine fine product, they were concerned about where the meat came from and, hey, aren’t panda’s endangered? Well, worry not. We’re happy to report that after decades of attempting to get the little bastards to breed, conservationists have decided to let the evolutionary process run its course. What’s that mean to you? Peefâ„¢ burgers, Peefâ„¢ steak, Peefâ„¢ sausage, and our very tasty Peefâ„¢ jerky.

As Lonnie himself says, “Isn’t it about time your meat choices became black and white?”

Be sure and check it out: Lonnie B. Hodge’s Panda Meat Emporium