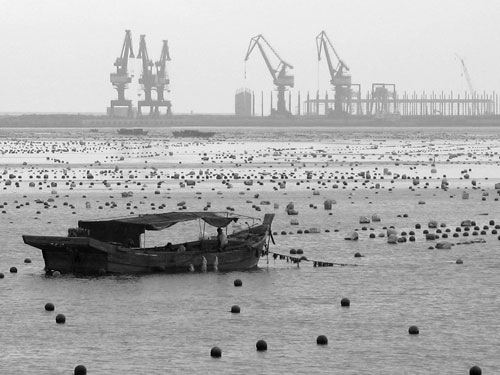 In my roughly year and a half of living in the Dalian area I know I’ve mentioned Kaifaqu å¼€å‘åŒº a half dozen times, but I don’t think I’ve ever done the place proper justice. I love it. It’s everything Dalian claims to be but isn’t. It’s clean(er), has more greenery and less people. It’s quaint, but still features lots of modern conveniences.

In fact, if there wasn’t a guy there that likely still has an open contract out on my head, I’d live there now. Everytime I’m in Kaifaqu now, I unfortunately have to be looking over my shoulder. It’s only a matter of time before Maggie is spotted and I am (rightfully) assumed to be the bastard laowai that stole her away from her ex.

Even with the risk (hell, because of the risk) Kaifaqu is just one hell of a cool place. I realize that “Kai Fa Qu” (translated: development zone) is a name given to thousands of city subsections across China that are promoting large corporation investment, foreign relocation, etc…. but for me, it’s an actual city name. I just can’t get around it. I can’t think of it as some cold and empty development zone… actually I can picture that as something a hip guidance counsellor would have posted on his wall. “Welcome To The Development Zone”

When I first moved to Jinzhou it was a closer trek than Dalian, and as such I visited the bars and shopping centre there a lot. Since moving to Dalian my visits have been less, but last weekend Maggie and I decided to go up for a visit and have some lunch by the sea. As I’ve got a bunch of photos and a new fancy photo script to make displaying them ultra-fantastic-cool, here are the details of the trip.

Getting there is pretty simple as there are numerous busses that run between Dalian and the ‘Zone’. From where we live it was only 2å…ƒ and took about 30 minutes. If stuffy road-bound mass transit isn’t your thing, you can grab the light rail (è½»è½¨ – qing1gui3) for a few kuai more (I think it’s four from the city centre). 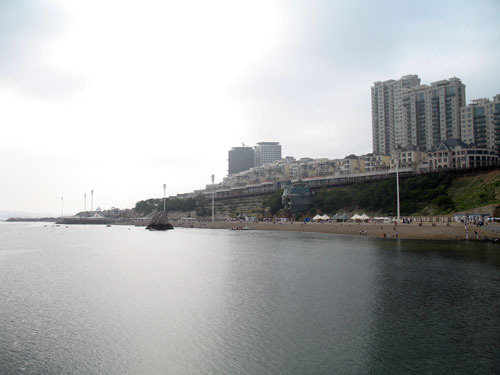 Dropped off at Ansheng, a massive mall, we hopped right back on a bus (#5) and road the 15 minutes to the beach. Kaifaqu’s beach isn’t fantastic by tropical standards, but is about on par with Dalian’s other beaches (Jin Shi Tan, Fu Jia Zhuang). The best part about it though is it is completely lined with BBQ/chuar joints. We chose the largest (and I’m thinking the worst) one based on the fact that there was a big open view of the beach and not a lot of people (good indicator of the quality of food I’m sure).

After the small and expensive chuar, we headed down the beach, which was characteristically busy – hot weather and beaches… there’s a connection there. True to style, most Chinese were just sitting under their umbrellas or in their tents looking much too unsteady in their sunfilled “relaxation”. To be fair we did come across one volleyball game (sans net) and a couple football matches. 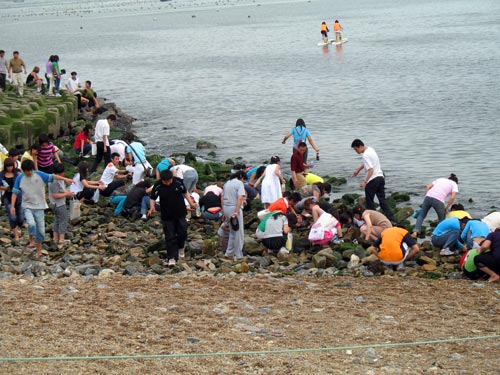 The thing I always get a kick out of at any beach I’ve been to in China is the group of people who (likely after trying to figure out the enjoyment of starring at the sea from a tent) decide to get entreprenurial and start digging for sea creatures. Chinese beach-goers are nothing if not practical. I had to patiently explain to Maggie that we were not going to find crabs (about the size of an average cockroach) and try cooking them for dinner – besides, we had nothing to take them home in (at which point she pointed to all the people using empty pop bottles). Practical and resourceful.

The beach (and the road beside it) are littered with massive random sculptures. There’s definitely a Greco-Roman nautical theme to them … well, not the dinosaurs.. I don’t know how they fit in. 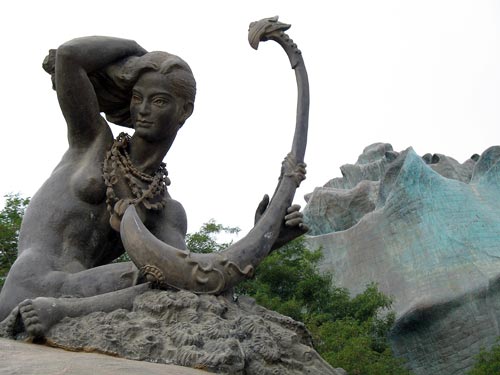 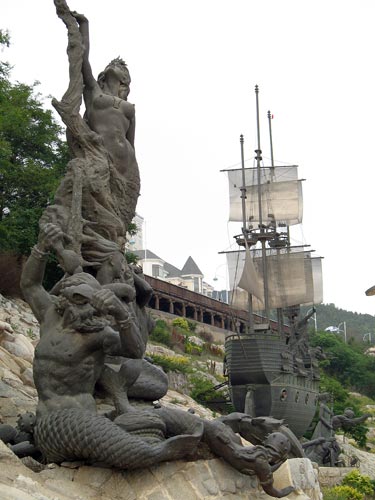 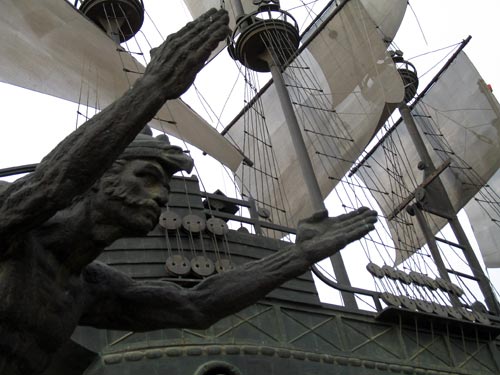 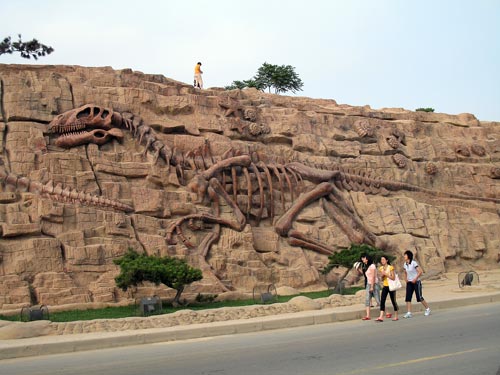 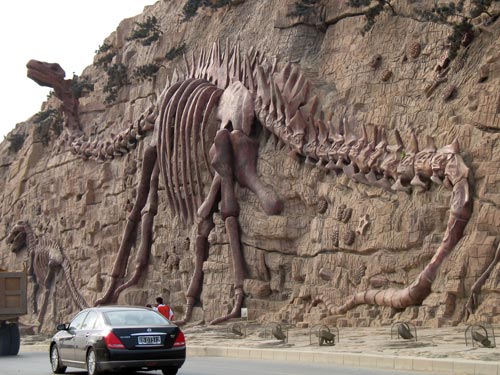 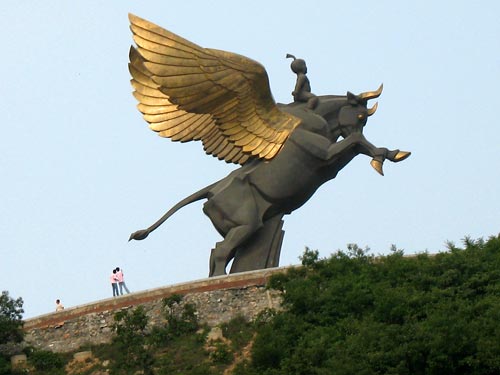 From the beach we hopped in a cab to the top of the near by Tong Niu Ling (ç«¥ç‰›é™µ) or Children Bull Hill to one of Kaifaqu’s most notable landmarks – the Flying Saucer (é£žç¢Ÿ – fei1die2). Perched atop the hill, the extraterrestrial view point gives you a good panorama of the city and Da Hei Shan on one side and the sea on the other. 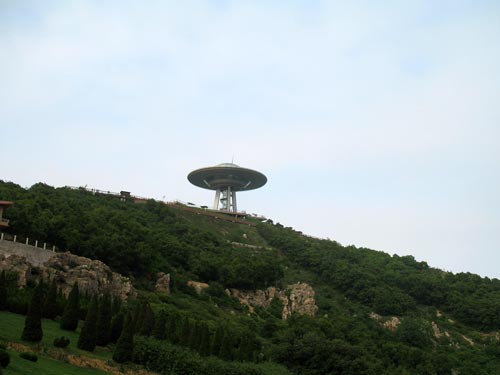 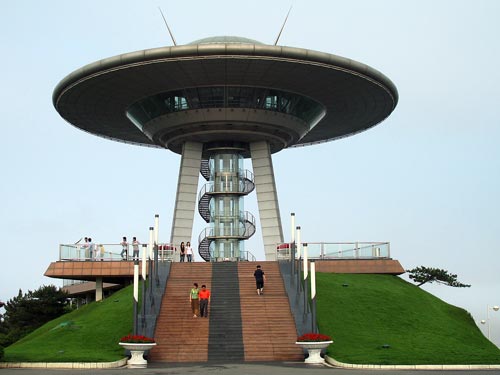 After taking it in for a while, we hiked down the hill via the road and walked back into the centre of the city (only about a 25-30 minute walk). Visiting the development zone in the nice June weather has really made me consider adding to my life the thrill that living in the city, which has at least one resident who would happily slit my throat, would bring. 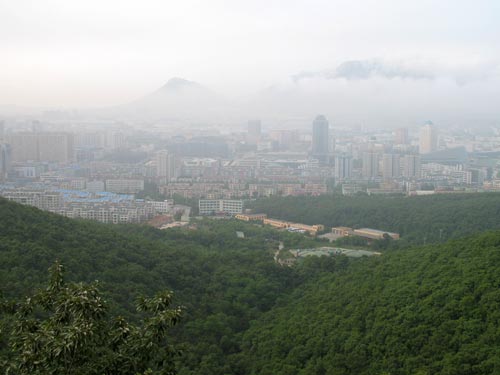 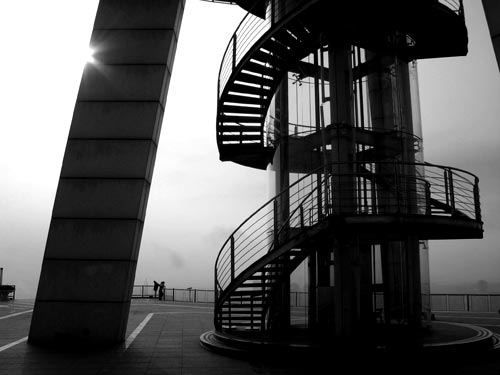 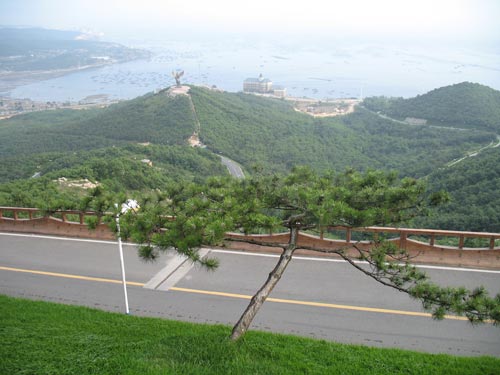