As some might remember, I bought an e-bike a few months back.

It’s pretty much replaced taxis as my primary mode of transportation (taxis having replaced buses shortly after I got caught in the rear door pushing my way on an overstuffed bus).

For a city like Suzhou I would even go so far as to saying a bike of some sort is a necessity, as it allows you to boot around all sorts of great back alleys that you’d never bother with using your feet or four wheels.

I had been thinking just the other day how despite being a bit nervous on it when I first road it home, I had become quite comfortable and was perhaps pushing the risk factor a little too much.

I was on my way to school the other day, crossing a rather congested four-lane road just outside my community. I’d successfully crossed the road and merged into the first lane of traffic when, while checking my blind spot to complete my journey to the far side, I merged with the car in front of me. 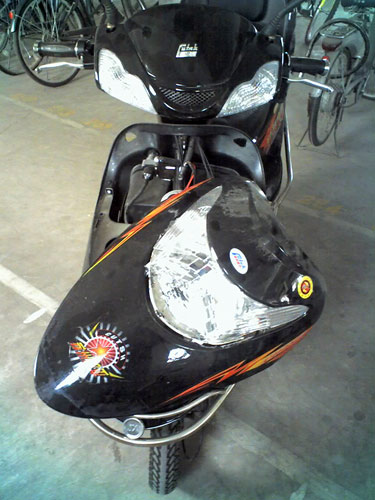 Apparently, in that half-second I looked behind me to make sure I wasn’t going to get creamed from behind, the car in front of me slammed on the breaks. I didn’t need to, the stopping power of the car’s rear-end was more than enough to halt me.

Fortunately all this happened at relatively low speeds and other than a bit of bike-rash on my knee and sore shoulders the following day, I’m tip-top. The front end of my bike however… not so much.

Structurally she’s still sound as a pound, but the cheap candy coating crumpled faster than a laowai after bad chuar.

Fortunately the manufacturer is local, and after calling them today, they’re sending a repair guy out tomorrow to assess how much fixing it’s going to cost me.

The whole situation could be a lot worse, but does generally suck. However, and this is a big however, I don’t know that I’d trade it all in and have to sacrifice the image of the woman’s face in the back seat of the car staring out the rear window as a big white guy removed himself from her bumper.

Us white folks… we can’t drive… or so they’ll say.