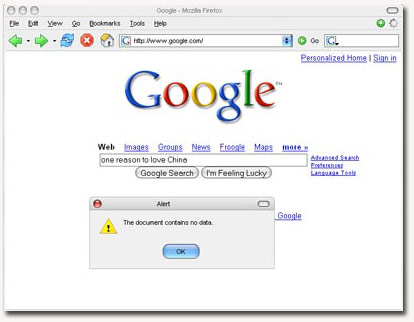 So, it’s not just June 4th… it’s semi-official – Google is now blocked in China. Like a bulb itchin’ to go out, it had teetered on accessible for a few days, but now Google.com is out. Fortunately for those that like Google searches that are censored for your viewing pleasure, you can still access Google.cn in China – oh, and it’s in Chinese.

Here’s the article from the Agence France Presse (AFP):

(AFP) The Google.com search engine has been blocked in most parts of China, as Beijing steps up its efforts to restrict the public’s access to information, a Paris-based media watchdog said.

Internet users in many major Chinese cities have had difficulty connecting to the uncensored international version of Google for the past week, Reporters Without Borders said in a statement received here Wednesday.

Aside from the Google.com search engine, Reporters Without Borders said the blocking was being gradually extended to the Google News and Google Mail services.

“Google has just definitively joined the club of western companies that comply with online censorship in China,” Reporters Without Borders said.

“It is deplorable that Chinese Internet users are forced to wage a technological war against censorship in order to access banned content.”

Random attempts to access Google.com in Beijing appeared to confirm that the international version of the search engine had indeed been made unavailable, while the censored Chinese-language version, Google.cn, was still accessible.

Google.cn was launched in January amid much controversy because the company agreed to censor its service according to the wishes of China’s propaganda chiefs.

A Beijing-based Google spokeswoman said Wednesday the company was looking into the apparent effort to block its most widely used search engine, but declined any other comment.

“We launched an investigation last week,” spokeswoman Cui Jin said. “As long as we don’t have more certain information, it would be irresponsible for us to comment more.”

Reporters Without Borders also said the Chinese authorities had largely managed to neutralize software designed to sidestep censorship since late May.

Software such as Dynapass, Ultrasurf, Freegate and Garden Networks is normally used to gain access to news and information that is blocked by the firewall isolating China from the rest of the worldwide web.

Bill Xia, the US-based exile who created Dynapass, said the jamming of these programs had reached “an unprecedented level” and he was convinced the authorities were deploying considerable resources to achieve it.

As this directly affects A) my everyday searches, B) my GoogleAds on three sites, and C) the easiest images search… I’m relatively pissed about it. Fuckers. Honestly. Fuckers. There’s just no better word for them.
At the end of the day I can use my proxy to access blocked sites (for now), but it’s a right pain in the ass. I’ve started using Yahoo and Altavista for my searches, but Yahoo’s interface just isn’t as clean and Altavista doesn’t have as much search capability… damnit, I like Google – why do they have to be little commie bastards?

I’ll tell you why… the several hundred thousand expats in China aren’t worth losing the 1.3 billion (potential) visitors that don’t speak much English and are quite content never knowing what they’re missing.