Alright, this is technically post-happening, as I’m posting this at the start of October, but pro-dating it to reflect when I went as I realized I never gave a proper description of my trip to the Dalian Forest Zoo.

I guess I should start by saying that my opinion of zoos is divided. I recognize that sticking animals in cages so we can gawk at them is cruelity to our fellow terra-bound bretheren. I also think that zoos play an important role in teaching folks compassion towards animals, giving people a way to access these otherwise often unreachable creatures and showing people that there is value in protecting them.

That said, my expectations of a Chinese zoo were not high. I mean, in a country with limited human rights, how much animal rights could there be? By and by my expectations were exceeded and it wasn’t as cruel as I thought it would be. Was it fantastic? No. Would it pass in a Western country? Not likely. But it was alright.

90% of the zoo’s appeal is the fact that it’s set in a foresty bit of mountainous area in the south end of Dalian (hense the ‘forest’ in “Dalian Forest Zoo”). The zoo actually breaks down into two sections – one with cages and the other like a safari (African Lions Safari for my fellow Ontario peeps). I didn’t go to the second bit, so all this is just for the stuff in cages bit. 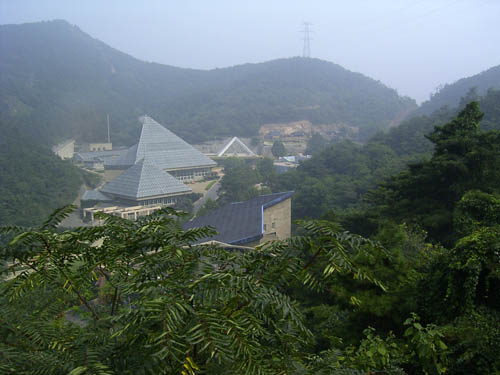 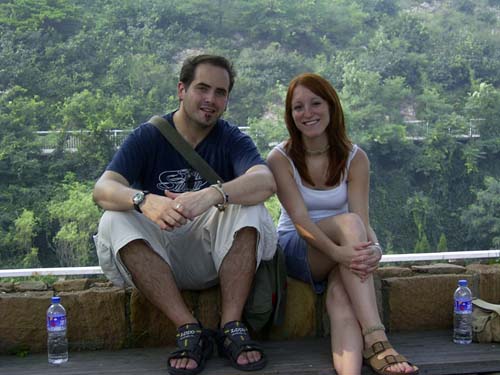 [1] Nestled in a forest-coated valley, the zoo is a break from busy Dalian. [2] Me and Vee.

We took a shared taxi there from Jinzhou and arrived at the front gate. A mere 40 kuai and we were in the park. At the entrance we were met by these glorified golf cart drivers who insisted we needed to pay 10 RMB each to take their transportation to the ‘actual’ entrance of the park – what they claimed was about 4 KM away. Clever.

So, a kilometre or two later (and 30 kuai poorer) we arrived at the entrance and went straight for the pandas. This was our primary reason for going. In fact it was Vanessa’s desire to see this rarest of bears that prompted the trip in the first place. 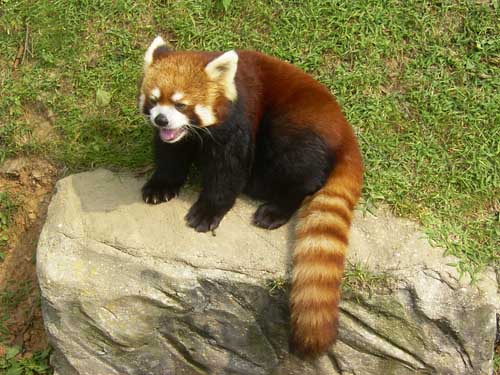 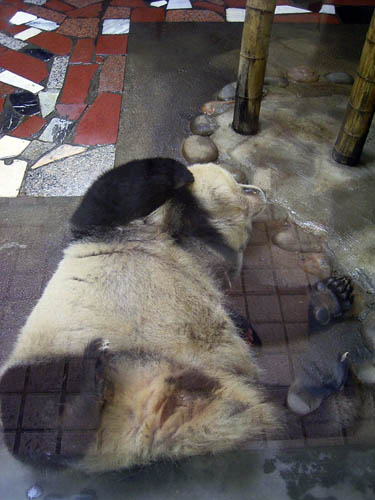 [1] Though they might gnaw off your face, it was hard not to grab these guys and squeeze them. [2] C’mon now, there’s no need for that.
Pandas:
Before you reach the Great Panda you pass an enclosure of Red Pandas, and these little guys won hands down as the cutest animals in the zoo. I’d seen one or two of them before at the Toronto Zoo, but here they had a big bunch of them. The regular panda was actually kinda boring compared to his lesser-cousins as he just laid there with his legs emBEAR-ASSingly parted against the glass (get it, BEAR-ASS, embarrassed, get it?). 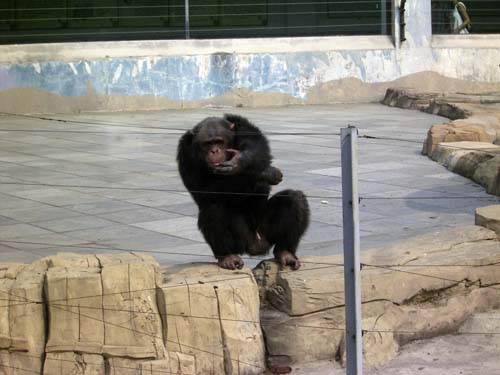 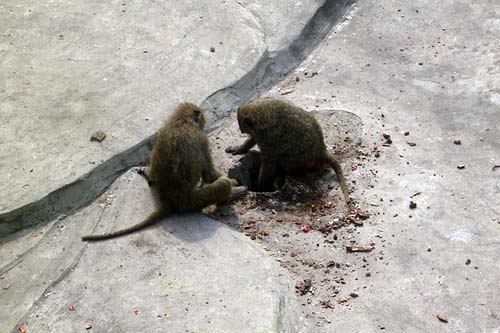 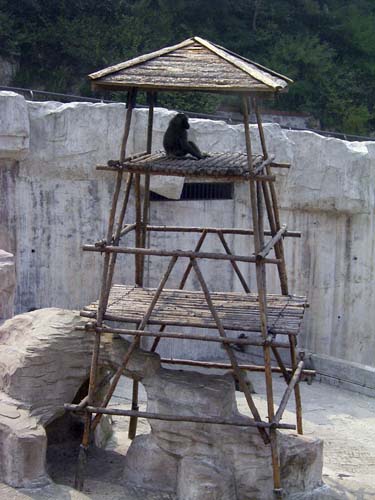 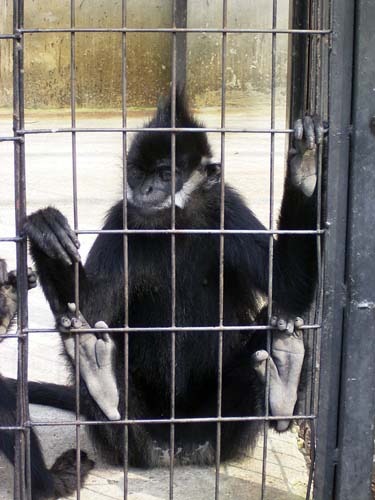 Primates:
The zoo has quite a few different types of monkeys (and a couple big chimps). The highlights were two ambitious baboons diggin’ there way to America (it’s neat putting that saying in reverse), and a chimp that would koutou (bow) for any food you might be willing to lob over the electric barrier to him.

Eagles/Vultures:
Big enclosure with equal number of the avian world’s most famous hunters and scavengers. There seemed to be a precarious peace between the two species. 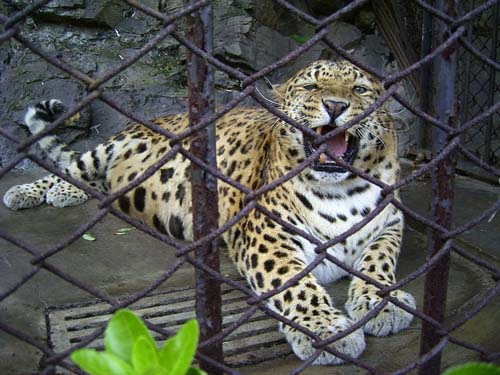 Leopards/Wolves:
The leopard cage reminded me that there is a complete lack of Health & Safety Standards in China. Whereas at home we’d have a big sign saying “Keep Your Fingers Out Of The Cage Or Be Dismembered!” backed up with two or three fences and barriers, here you could quite literally reach in and pet the kitties if you felt so inclined. In fact Vanessa nearly wet herself while she was taking a close-up photo and the playful predator lept at the chain-link fence standing between them. This cage and the wolf cage were the worst for size, and it was no wonder the wolves decided to just hang out at the back of the enclosure, at least a little out of site (the back was only about 10′ away). 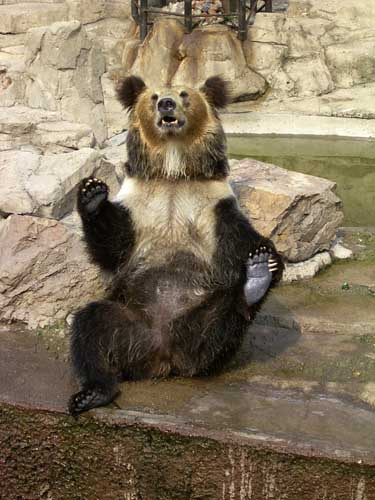 Bears:
The bear area basically was split between big Brown Bears and these really slick looking Sun Bears – all of which had mastered the art of showing off for food.

Elephants:
Not inclined to entertain, the male/female pair of elephants didn’t do much to hold our attention, despite being held in a cage that had stadium seating around it. I assume there was a show at some point… meh. I’ve seen Thai elephants play football and reinact historic battles… what could these two do?

Tigers:
The tigers were equally docile, but it was nice to see a Siberian/Manchurian Tiger up close. These guys are 300 kgs of killing machine, and are reputed as the largest cats in the world. Mostly they just laid around in their plexi-glassed in enclosure.

After the tigers we returned to the panda bit to see if he had awaken. He was indeed, and now he was eating. Exciting! It’s no wonder these guys have so much trouble breeding to save their species … they’re lazy gits.

We decided to hike it back to the main entrance and thumb our noses at the golf-cart girls. The walk was pleasant, and I suggest that for all future visitors, don’t be dupped by their witchy ways. It’s much shorter of a walk than they say.

Oh, and for those that the Dalian Forest Zoo is just too much for, you can see the Jinzhou Dirty Park zoo for a kuai. Dirty monkey food is extra though. 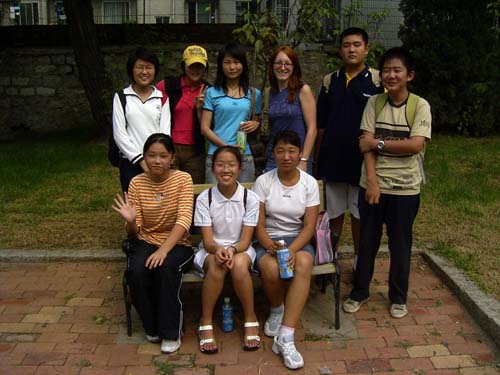