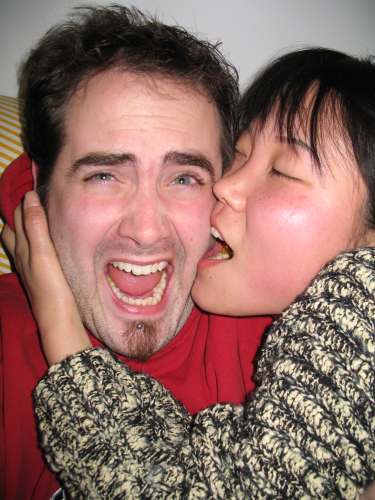 I meant to post last night, but after another day of failing to get Maggie out of the damn hospital, I just didn't have the energy for it. Also, with my last post being a bit biting, and my most recent LLW post being down right venomous, I figured perhaps my thoughts were best left to myself – as they had only gotten worse.

That said, yesterday a little ray of sunshine appeared in Maggie's room. Finally a kindly nurse sat down with Maggie and helped her understand what happened, and also gave her the Chatin (Chinese-Latin) translation of it… which, with A LOT of help from Google and Wikipedia allowed me to at least get some idea what the hell was going on.

This nurse had poked her head in a couple times to take blood pressure or whatnot, and was always really chipper and kind. She had mentioned she liked English and envied Maggie's language abilities. Whether it was the novelty of mingling with a foreigner or just her natural disposition matters little, as the fact is she was the only nurse we met in a week at the hospital that exuded any sort of "care".

Now home and getting a healthy dose of missed TV, Maggie's attitude is a lot better than while she was surrounded by the numerous women that were camped out in her room (1/4 of which were patients, the rest visitors and a nice ayi). Rather ironically, the first thing she said when she came home and looked at our bedroom was 'it seems empty… like something is missing,' quickly adding, 'where are all the noisy women?!'

I want to thank you all for the well-wishes you gave in comments and e-mails. You can't know how much it meant. This was hands-down the most difficult thing I've had to endure while in China – and I've weathered a few things in my two years here. It's nice to know that despite not knowing a lot of you, you all had the compassion to share your desires to see Maggie better. éžå¸¸æ„Ÿè°¢ä½ ä»¬!

A few people have asked what exactly was wrong with Maggie, and as it's not my body I think I'll leave it off of here. Suffice to say, we've both got a better idea now, and it was just a fluke that it happened in the first place. Nothing really caused it, nor could have prevented it. Provided that she rests for another 7-10 days, there should be no long-term problems.