Maggie went in for her 10-day follow-up test to be sure she was all ok, and no problems. Everything is back to normal.

Now, I understand we often can't choose when these crazy medical emergencies happen, but honestly, what winds of fate have it in for me? Upon returning to the horrible, dirty, mix-matched, over-crowded and noise hospital – I am now forced to enter this: 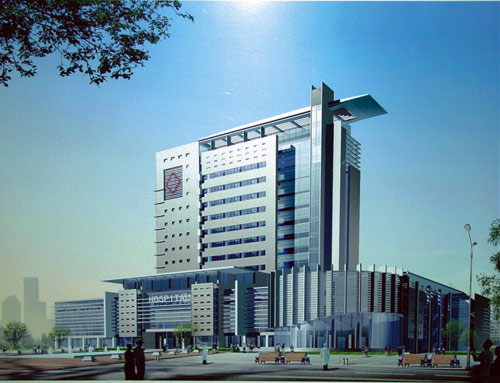 Though I had guessed that perhaps this massive and immaculate structure that was still being hammered upon while Maggie was in a decrepit building behind it would one day become the NEW Suzhou Fu Er Yuan, but a week later? C'mon, it's just cruel.

The hospital is awesome, and I'm quite certain that had we'd been faced with this that chilly and scary Friday morning two weeks ago, my opinion of hospitals in China might indeed be a bit different. The first four floors of the building layout similar to a donut-shaped shopping mall, with a massive skylight in the middle letting in lots of light – in stark contrast to the dank and mouldy ancient concrete constructions we spent a week in 10 days ago. The first floors handle the bulk of the in-and-out patients, with the long-termers making their way to the upper floors (I assume).

Waiting rooms are organized with plenty of seating and a number system that informs you when it is your turn. Apparently the rush the nurses' counter until someone in white pays attention to you system that was previously in place wasn't working out.

Now, I can't say for certain that things are more caring or organized in the minds of the nurses and doctors, but one can hope that with a more sensible work environment that didn't make you feel you were working a war-front triage unit, perhaps they'll have more time to pay attention to their patients.