Just a little Tuesday FYI for any Canadians who may be passing by. Please consider signing and keeping the Internet the wonderful flourishing network it is. 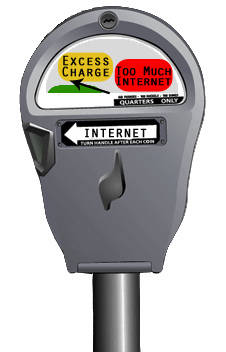 This means we’re looking at a future where ISPs will charge per byte, the way they do with smart phones. If we allow this to happen Canadians will have no choice but to pay more for less Internet. Big Telecom companies are obviously trying to gouge consumers, control the Internet market, and ensure that consumers continue to subscribe to their television services.

This will crush innovative services, Canada’s digital competitiveness, and your wallet.

We need to stand up for the Internet.

Sign the Stop The Meter petition! *Choose from of the options below or do all three!

A Call for Continued Open Standards and Neutrality

Also, be sure to check out this article in Scientific American, where Tim Berners-Lee (the guy that invented the Web) discusses how sites like Facebook and large ISPs are destroying the principles of the Web — namely by open standards and net neutrality:

A couple key passages from the article (it’s six solid pages, so grab a cup of coffee, because it’s well worth the read):

Several threats to the Webâ€™s universality have arisen recently. Cable television companies that sell Internet connectivity are considering whether to limit their Internet users to downloading only the companyâ€™s mix of entertainment. Social-networking sites present a different kind of problem. Facebook, LinkedIn, Friendster and others typically provide value by capturing information as you enter it: your birthday, your e-mail address, your likes, and links indicating who is friends with whom and who is in which photograph. The sites assemble these bits of data into brilliant databases and reuse the information to provide value-added serviceâ€”but only within their sites. Once you enter your data into one of these services, you cannot easily use them on another site. Each site is a silo, walled off from the others. Yes, your siteâ€™s pages are on the Web, but your data are not. You can access a Web page about a list of people you have created in one site, but you cannot send that list, or items from it, to another site.

… Net neutrality maintains that if I have paid for an Internet connection at a certain quality, say, 300 Mbps, and you have paid for that quality, then our communications should take place at that quality. Protecting this concept would prevent a big ISP from sending you video from a media company it may own at 300 Mbps but sending video from a competing media company at a slower rate. That amounts to commercial discrimination. Other complications could arise. What if your ISP made it easier for you to connect to a particular online shoe store and harder to reach others? That would be powerful control. What if the ISP made it difficult for you to go to Web sites about certain political parties, or religions, or sites about evolution?

… Totalitarian governments arenâ€™t the only ones violating the network rights of their citizens. In France a law created in 2009, named Hadopi, allowed a new agency by the same name to disconnect a household from the Internet for a year if someone in the household was alleged by a media company to have ripped off music or video. After much opposition, in October the Constitutional Council of France required a judge to review a case before access was revoked, but if approved, the household could be disconnected without due process. In the U.K., the Digital Economy Act, hastily passed in April, allows the government to order an ISP to terminate the Internet connection of anyone who appears on a list of individuals suspected of copyright infringement. In September the U.S. Senate introduced the Combating Online Infringement and Counterfeits Act, which would allow the government to create a blacklist of Web sitesâ€”hosted on or off U.S. soilâ€”that are accused of infringement and to pressure or require all ISPs to block access to those sites.

In these cases, no due process of law protects people before they are disconnected or their sites are blocked. Given the many ways the Web is crucial to our lives and our work, disconnection is a form of deprivation of liberty. Looking back to the Magna Carta, we should perhaps now affirm: â€œNo person or organization shall be deprived of the ability to connect to others without due process of law and the presumption of innocence.â€

The last paragraph of the article (which I’m purposefully leaving out here to encourage you all to go read the full thing) is awesome; and the last sentence, beautiful.