I’ve just started a group writing project over at the Lost Laowai blog. Basically, the idea is to get bloggers in the Sinosphere to blog about what they knew or thought they knew about this massive country before they got here (and became fat, jaded bastards like myself).

I think back to what I knew, and it’s admittedly quite embarrassing. China, being as far away from my small-town Canada as you could possibly get, always seemed just about the most foreign place in the world.

I have absolutely no memory of meeting anyone Chinese before I hit college. Yep, I think I lasted 21 years of my life not meeting a single member of the most populated country on earth. I am not sure if that speaks towards China’s previous emigration polices, or the cultural ineptness of my hometown. 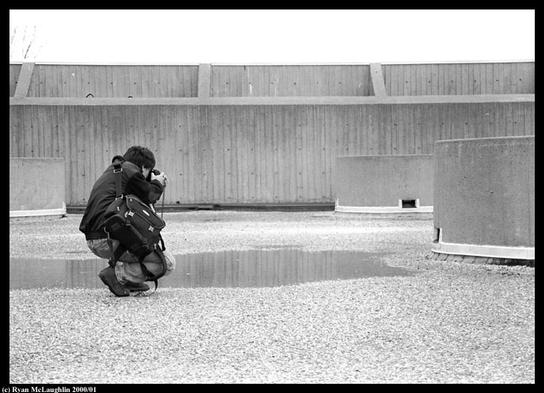 Despite my limited exposure to other cultures, in college I developed a real desire to expand my world-view. It was in this vein that I signed up for a buddy program with the International Department. They take one Canadian college kid and pair them up with a student in the ESL/International Program. I was paired with Teng Da (whose name I thankfully had written as a caption of the attached photo, lest it have been lost for all time).

We were paired because of our equal interest in photography. So, we spent a couple awkward hours over several weeks walking about the college campus and snapping shots. Teng didn’t leave much of an impression on me, but I was in college, so really, not much did. The only conversation I remember having with him about China went something like this:

China completely faded from my world-view after that until I was in Thailand in 2004. I had just finished backpacking around Europe for three months, and was eager to soak up some Asian culture for another two.

While in Northern Thailand I was lent a copy of The Rape of Nanking. It’s hard to remember my initial impressions of the book, for I had a complete lack of context at the time. I had heard of Nanking, but didn’t know why it was sometimes called Nanjing (the same confusion had confronted me with ‘Beijing’ and ‘Peking’ when talking to my buddy Da). The book spoke of ‘the fall of Shanghai’ and the Japanese marching to Nanjing. My geography of China was non-existent at that point, and never did I imagine that I’d be living directly between the two cities the novel was talking about.

A couple weeks later I moved further south in Thailand and ended up meeting a quite cool German guy who had stopped in Thailand to revisit Koh Phangnan (explaining how different it had been when he first visited a decade previous). Jurgen was heading to Shanghai, as he had heard it was the “new Tokyo” for hipness and he was keen to see what all the fuss was about.

We kept in touch, and I heard from him after he returned home. He had never found the ‘fuss’.

China again faded into the background noise of life until I began searching for ways to combine a desire to travel some more as well as save money for getting my ass to Australia (which, some of you will remember, was the original plan). ESL seemed like the most viable way, and though I had fallen in love with Thailand, China offered 15-20 hour work weeks for nearly twice the pay that those sweaty Thai schools gave you for shirt-and-tie 40-hour weeks.

(incidentally, had I had a degree and not a college diploma, I would most likely be telling you all about how little I knew about Korea or Japan.)

So, as you can see, when I arrived in China I had all the foreknowledge of an infant. I had done my homework by this point, but was still relatively clueless. Sure I had seen the movies (The Last Emperor, Seven Years of Brad Pitt, Kundun, Empire of the Sun, Crouching Tiger, Hidden Dragon, Hero, etc…), and you bet your ass I was on my China LP guide like a fat kid on a Smartie; but upon arrival, like most I assume, I was an empty vessel.

It’s filled a little in my time here, and I would love to sit down with Teng Da now and chat more about him and how he ended up in my small-town college with a crapload of camera equipment. The thing is, I don’t think not knowing about a country or a culture beforehand is a detriment. Perhaps it’s a bit indicative of North Americans being culturally isolated, but for those of us with a desire to go places and see them first hand, it tends to make it a more interesting journey.

One of the reasons I really love living in China (despite whinging about it so much), is that there’s so much more to learn. Every time I think I’ve got something figured out, someone does something and turns my understanding of it completely upside down.

You gotta respect that about a place.