Well, I’ve returned from the savage lands north east of the wall, and despite my inlaws doing their very best to stuff me to the point of explosion, I survived.

I’m going to say this once, to be clear about things… NEVER TAKE THE FUCKING BUS IN CHINA.

As I mentioned post-previously (c’mon, that’s kinda fun to say) – Maggie and I opted to take the bus as she was told (by the ticket agent) that it was faster and cheaper. Cheaper it was (300 RMB vs. the 400 RMB of the train, and 800 RMB for a flight), but faster? Not a beancicle’s chance in Wuhan.

We had been told (again, I want to emphasis, by an official agent at the bus station) that it would be 15 hours to Dalian. Considering the train is about 23 hours, this seemed like a pretty good deal. My smile started to waver when we got on the bus and were nearly knocked off again by the force of feet smell that kicked us in the face. 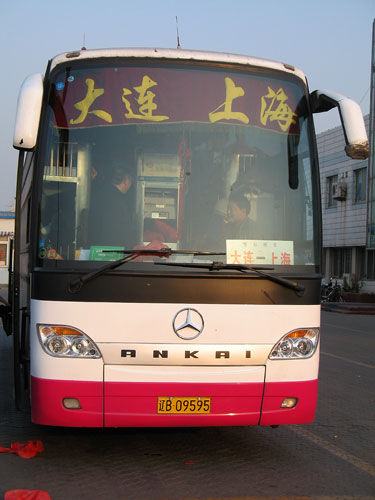 The bus was packed, but the driver quickly shooed a few people off some bunks and we had our beds. The man insisted that I hop up on one of the elevated ones, but my size and chivalry led me to offer that one to Maggie – I took to the floor one bunk back.

The bunk wasn’t what you’d call comfortable, but it wasn’t horrible. There were enough never-been-clean blankets piled into it that it was cushy. However, the bus continued to pick people up (despite being absofuckinglutely full), and I ended up spending the night using my knees to remind the guy sleeping in the isle that my leg was, despite its sexiness, not his mistress. 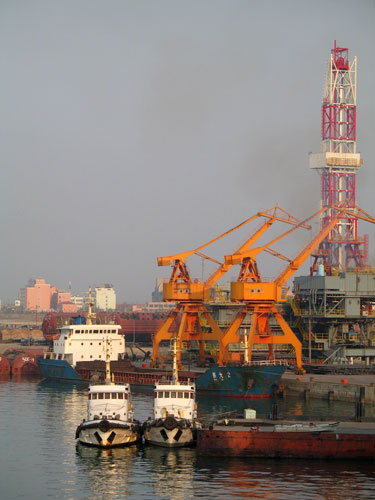 After a long, long night we hit the 15 hour mark – in Yantai. The little Shandong port city has long been on my list of places to travel to, but at 7 am after a night of breathing dirty socks… I was not pleased. In fact, I was shaking my head in “I should have known better” disbelief the whole walk up to boarding the boat.

Yup, eight more hours on a ferry, and where as at least the bus was mildly comfortable, we were now expected to crowd into a small stuffy room and park ourselves on hard plastic chairs for the rest of the journey – or pay an additional 80 RMB for sleepers.

Two hours in, my patience was strapped and Maggie started looking like she might throw me into the waves for all the whinging that was coming from me. Fortunately we found a little shop on the boat that sold beer, and I started feeling a whole lot better. Yeah, I was drinking at 10 am, what of it? It’s what I like to call “Survival Drinking”.

Mid-afternoon we arrived in Dalian, found ourselves a taxi and high-tailed it to Jinzhou where we were greeted with the first bit of real food we’d eaten in nearly 30 hours. And the food didn’t stop for four days.

Food, as we all know, is a huge part of Chinese culture. It, often more than little red envelopes, is the way people express gratitude, wealth, friendship, a desire for guanxi, etc.

I had made the stupid mistake of eating crabs the last time I was at Maggie’s parents’ place, and upon seeing me struggle with the little sea spiders, they asked if I’d ever eaten them before.

Not thinking, I off-handedly mentioned that I didn’t often eat crabs, but on the few times I did they were much bigger, as Canadians don’t eat small crabs like these. The words had barely squeezed passed my shell-cracking teeth when I realized what I had done. Inadvertently, I had just caused my inlaws, the LAST people you want to do this to, to lose face.

So, for months now I’ve been promised that when I came back to Dalian I’d be greeted with some monster crabs. True to their word (and much to the distaste of their savings, I’m sure), I got to eat some massive crustaceans (and perform some much needed “wow, these are much bigger than I’ve ever had in Canada” damage control).

The main purpose for this trip to Dalian was to give Maggie’s extended family a chance to size up the laowai. Because we had skipped on the traditional big wedding, we’d not given the relatives a suitable opportunity to give Maggie’s folks a bunch of red packets stuffed with Mao’s serene face.

The parents rented out a big dining room at a local hotel, and brought enough candy and cigarettes to feed an army of tweens. All in all about 25-30 of Maggie’s family members came, but I quickly gave up attempting to remember everyone’s proper title. 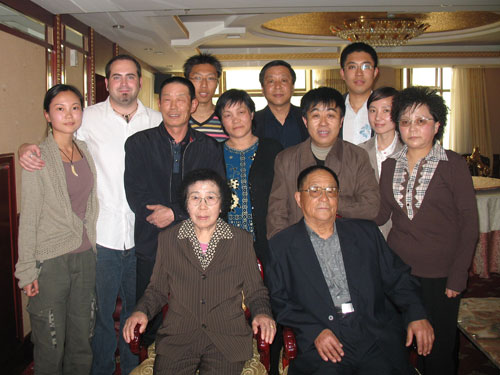 As some ‘cruelty to foreigners’ initiative, Chinese culture insists on labelling everyone in the family a specific title respective of where they, and yourself, sit in the family tree. There’s nothing so simple as “this is my aunt” or “this is my grandfather” … nono. It works more like “this is my mother’s eldest brother’s wife”, which is completely different from “my father’s younger brother’s wife”.

Fortunately there was plenty of beer, and I was happy to just smile and nod when introduced.

The food was, as expected, fantastic. Dalian is famous for seafood, and there wasn’t much that escaped my chopsticks. I had lobster, beautiful clams, squid, octopus, sea cucumber, abalone, and (for the first time) shark fin – which looks nothing like you’d expect.

After lunch, and some photos, we returned to ma and ba’s apartment for some tummy rest before resuming the mass consumption at my favourite Jinzhou Korean place (Korean food, like seafood, is something I’ve miss dearly since moving from Dalian).

Wednesday I packed up my stuff, said goodbye to the folks and Maggie and headed down to my buddy Gabriel’s. Of all the friends I’ve made since coming to China, Gabriel is the only one that I’ve actually hung out with back in my home town (his grandmother lived there, and we both happened to be visiting last summer). Perhaps it’s that, or just the fact that he’s one righteous Francophone, he’s always someone I’m excited to catch up with.

But catching up had to wait – Spiderman 3 had just opened, and unlike Suzhou, Dalian gets movies in English. Eager to finally put a face to the blog, I met up with Chris and we headed to the cinema to shell out 40 RMB for disappointment. 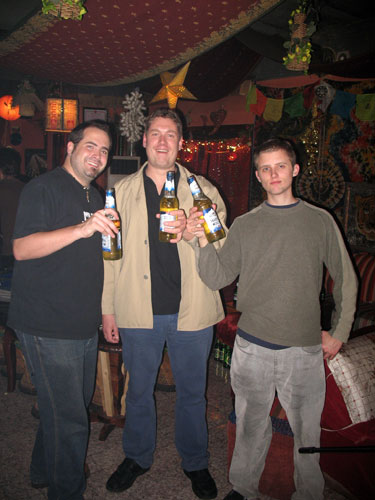 After the film, we met up with Gabriel and Kim (another face-to-the-blog meeting) and consumed copious amounts of chuar and beer. Stuffed and saturated, we headed to a party where we continued our quest to drink twice our body-weight in beer. After we cleared through the booze we brought (and cleaned out our host Darby’s fridge) we headed over to The Nep (or what used to just be confusingly called either the Tibetan Bar or the Nepalese Bar – or, even less occasionally, Xi Xiang Bang Ma, the bar’s actual name).

Things get a bit blurry at this point, but I do clearly remember Chris taking some Ã¨r guÅ tÃ³u to the eye, and Gabriel winning himself a bruised shin for it. 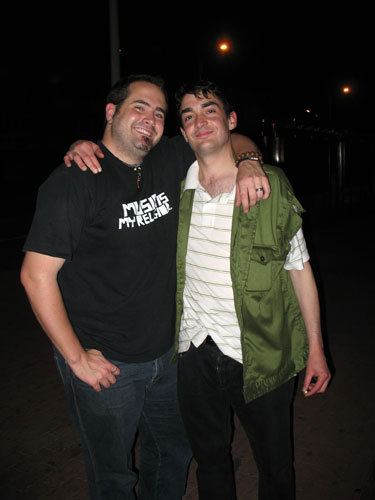 All-in-all it was a great night out with the boys; a reminder of my more social days back in Dalian. Suzhou, and married life, have taken their toll on me and I can’t drink like I used to. There was nothing like the changing altitudes and mild turbulence of my flight home to remind me of the fact that I’ve aged.

I’ve had the house to myself since my return yesterday, as Maggie stayed on to get a bit more face time in with the parents. With lots of projects to get caught up on (what I had originally intended to spend my entire holiday doing), it’s been nice having the house to myself. That’s not to say I’m not looking forward to Maggie’s return tomorrow, though I guess it does mean I need to clean up the mess I’ve made – revelling in my pseudo-bachelorhood.