So, as everyone is now well aware, China was hit by a major (7.8) earthquake at 2:30 this afternoon. Current reports cite nearly 9,000 dead, and its effects were felt as far north as Beijing, in the south east in Taipei, and directly east of me in Shanghai.

I had no idea.

At the time I would have been out getting Addie’s rabies shot and RF chip and though I can’t be certain, I assume I was on the road walking back home when it hit, but I didn’t notice a thing.

Reports from Shanghai and Beijing indicate that buildings shook for upwards of 2 minutes. Surely I should have noticed buildings swaying. But despite being closer to the 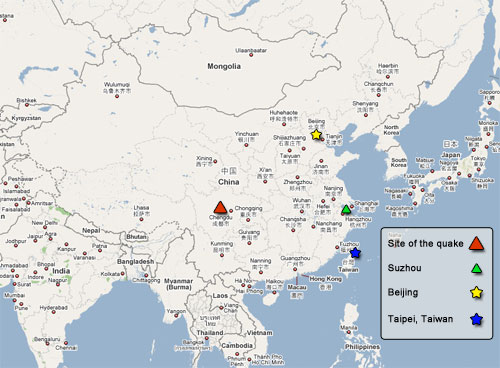 This makes the third large-scale earthquake to hit Western China this year (one in January in Tibet and another in Xinjiang in March), but is the first to hit a heavily populated area. With Sichuan being China’s most populated province, and that population almost entirely housed in multi-storey apartment buildings (that seem shaky on a good day), it sadly leaves little question that the already massive death-toll is sure to continue to rise.

It also can’t help but bring to mind Tangshan, a city directly hit by an earthquake in 1976, which killed more than a quarter million people. Coincidentally, the initial quake in Tangshan also measured 7.8 on the Richter scale. In that case, and I pray not in this one, the death and damage severely increased when an aftershock hit the area 15 hours later.

For some detailed coverage of reports on the quake – check out this continually updated Shanghaiist article.