“They say you shouldn’t look a gift horse in the mouth… but checking for legs isn’t a bad idea.” – Ryan said to Freddy at the 45 minute mark.

As previously mentioned, a few of us were shooting for a redo of last weeks adventure to the beach. We got a bit more ambitious this time and planned it for the shores of Jinshitan (é‡‘çŸ³æ»©). The only problem was transportation, as it’s about 20 minutes north of Kaifaqu (å¼€å‘åŒº), which is 25 minutes from Jinzhou (é‡‘å·ž). Fortunately one of the new Chinese teachers at the school, Summer, was interested in coming and managed to convince her boyfriend to come too… and he drives a van.

Everything was set, we had a disposable BBQ, loads of lamb kabobs (ç¾Šè‚‰ä¸²) and various fruits… but come our 3:30 departure, no boyfriend. After several phone calls marked with decreasing degrees of patience, he showed up and we headed on our way. The reason he was an hour and a half late… had to wash the van, he thought it’d be rude to let us ride in a dirty vehicle. 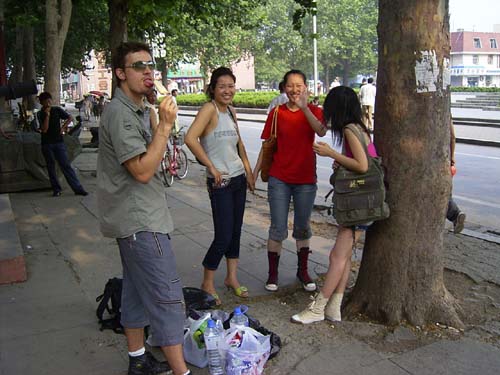 waiting…
We got to the beach rather late, but set right to work getting the grill fired up and the meat cooking. I, for the third of three times visiting the beach, didn’t go in, but rather spent the time chillin’ with Maggie on the shore.

After feasting for a while most everyone decided to head into the water, so Maggie and I took the opportunity to take a walk down the beach and were treated to some cool fireworks and a load of people dancing around a big bonfire. 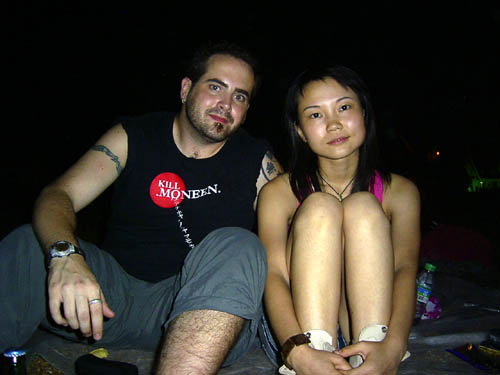 Maggie and Me, not the best photo of us, but cute none the less.
I’ve got a unique friendship with Maggie in part because I’ve been able to watch her English abilities grow over the past 7 months. When I first met her I didn’t even know she could speak English; as for the first week or two I was at the school she never said a word to me. But, as you do with cute girls, it wasn’t long before I pushed the conversation issue and realized it was just her shyness. And in the ensuing months we’ve become good friends.

However, it wasn’t until the pressures of my impending departure crept up on me that I began to realize how little (nothing really) we’d done togther outside of school… but these last two weeks have given us more opportunity, and I’m thrilled about it, though it is making me cringe more and more when I think about that inevitable goodbye. 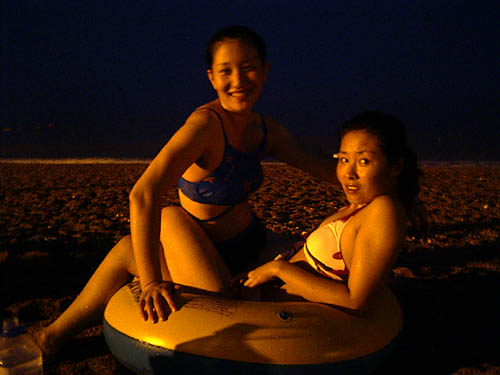 Summer and Doris sharing a floatation device.
Anyway, we got back from our walk just in time to find Summer’s boyfriend searching the beach for us to say we were on our way out. I was a little disappointed that the night had to end so early (8:00), but quality, not quantity, as they say.

Jianzi (é”®å­)
I don’t know why it’s taken me so long to comment on this wonderful little invention. Jianzi (é”®å­) is the lust child of badminton and hackey sack. Basically it’s a game that, like hack, involves you kicking a small object to other people in a circle. From what I can see it is the most popular game in China. Sure Ping Pong may be the national sport, but off the books, it’s all about Jianzi. Any spare moment throughout the day you can see people kicking these things around.

The great part is, unlike hack, it’s not age bias. China has an uber active senior community and they’re full-on into it. Recently Shengbin Huayuan (ç››æ»¨èŠ±å›­), my home, hosted a bit of a jianzi championship… it was pretty cool to watch – and thanks to the marvels of my crappy little digital camera, you can: 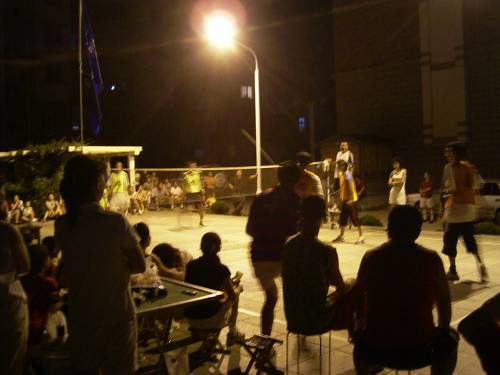 Only 11 more days until Vanessa arrives!