If you come to my site for news about me…

I’ve finally settled into my new routine. Teaching at a primary school as opposed to teaching at a private language school does comes with some differences. 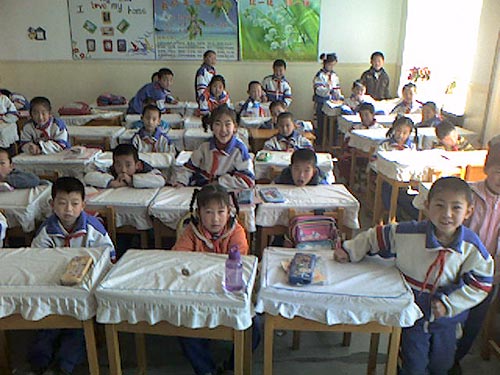 1) More kids. At Future School I was teaching class sizes ranging from 5 to 19 kids at various levels of English. At my new school I am teaching average class sizes of about 35-40 ranging in age from 7 to 11. Where at FS I taught a wide range of ages and levels (from pre-school to adults, can barely say their name to near-fluent conversation), at the primary school most days I’m lucky if I can get them to remember “I’m ## years old.”

2) Staff. Man, the last few weeks has done more to improve my Chinese than any single thing I’ve done for my Chinese education thus far. Where at Future School there MIGHT be 2-3 people on staff that can’t speak English at the primary school it is effectively the opposite. Most teachers (having had a reasonable education) can manage some basic sentences and such, but for fluency, I think there are maybe only 5 people out of a faculty of 50 or so that can really speak reasonably comfortably. I may see this change over time, as I think at first many of the teachers are rather shy. 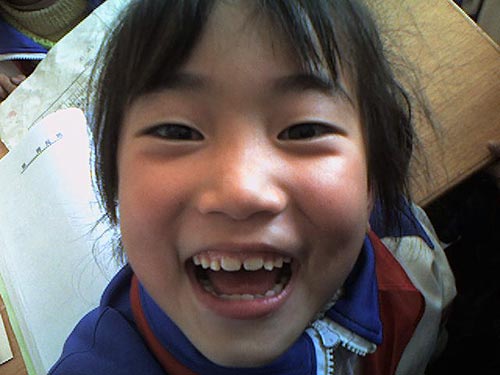 This is actually something I have to combat quite a bit. Whereas the teachers at Future School are used to working with foreigners, the teachers at the primary school aren’t. I often find that I feel I’m stepping on their toes when I come into their classroom. I also get the sense that they’re a bit worried I might call their bluff on what they may have indicated on their job application as their English ability. (more so for the English teachers).

3) Distance to school. I’m now subject to the arduous task of taking public transport every morning to get to school (gasp!). While working in Jinzhou I did have to do this, it was pretty simple, and my last 6 months at FS in Dalian, it’s just been a short walk to work three times a week. Now however, I have to take a bus at the busiest time of the day, often having to wait two or three buses to find one where it’s not so full peoples limbs are getting caught when the doors close. I’ve worked it out if I leave a little later, getting to school just before my 10:10 class starts, the buses aren’t half as crowded. 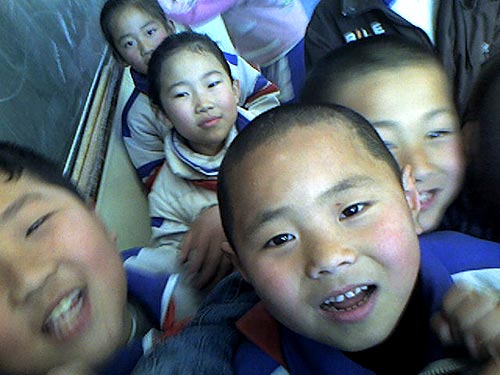 4) Work days. It’s a bit surreal having the weekends off after working nearly every weekend for the last year and a bit. It’s nice in some regards, but is hurting my social life with all my old FS friends as they’re all on my old schedule and have to get to bed early on the weekends. And in reverse I’m playing the wuss by calling early nights during the week, when they all go out.

5) Class length. FS classes are generally 2 hours long with a variety of levels per day. At my new school the classes are 40 minutes long and I only teach three grades all week. Basically I do a lesson plan Monday for Gr. 1, teach the exact same thing 6 times Monday, then modify it slightly for my tuesday classes of Gr. 2 and Gr. 3. I repeat this process on Thursday and Friday (I’ve Wed., Sat. and Sun. off).

6) Freedom. I’ve a lot more freedom in what/how I teach the kids. The curriculum calls for the use of an Oxford Press English book for Primary Students, but it is totally retarded. These kids can barely remember “Where are you from? I’m from China” after three weeks of review, and the Oxford book would have me teaching them “Do you want to see my present?” “Show me your new shoes”… just stupid. Anyway.. needless to say, I’ve sort of scrapped the book. I’m going to make a modest effort to include it in some classes so the kids’ parents don’t feel they’ve wasted their money in purchasing it. Next term I’m going to seriously recommend changing books. If anyone has any suggestions, please e-mail me.

Anyway, those are the major differences. I’d say mostly they are positive. I am enjoying the new job so far, and am not regretting leaving the safety of Future School, as I thought I might.

If you come to my site for my sometimes interesting, sometimes stupid, and often scathing criticisms of life here…
So, Taiwan has once again declined an offer from the Mainland for some pandas as a rather dear peace offering. I’m not really sure who cooked up this ‘panda diplomacy’, but I think it’s passed its novelty. 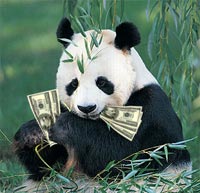 If you ask most people in China, they are under the opinion that China gives pandas to other countries as a way of extending friendship to that country. They see it as an altruistic way of sharing Chinese culture and kindness with nations that want to be friendly with China.

It, like almost everything when it comes to China, is a money grab. China lends these little monochrome bamboo eaters out on a 10-year loan at about $1,000,000/yr.

Under current agreements, the zoos in Atlanta, Memphis, Washington and San Diego each pay more than $1 million a year for what the Chinese government says is a fund to protect endangered animals. In addition, China charges the zoos a one-time fee of about $600,000 each time a panda cub, such as Tai Shan, is born. – Pricey pandas put squeeze on zoo finances, By Gary Emerling, THE WASHINGTON TIMES, February 26, 2006

After revealing that it wasn’t a “gift”, I asked my adult students once if they felt it was fair for China to charge this money. They immediately said “of course”. So I furthered the conversation by asking if it is “right” for a country to claim they “own” a species of animal simply because its natural habitat resides within the country’s border. They again said, “Of course! China is a poor country, Western countries have the money to pay for it.” Using this logic, I finished the discussion by asking if they felt that China should pay – to the respectively poorer countries than China – approximately 8,000,000 RMB/yr. for each non-native cat (tigers, panthers, lions) I saw at the Haerbin Dongbei Tiger Forest Zoo. No comment was given.

Since 1998, thanks to the WWF, U.S. zoos must make sure that at least half of the money paid for the loans is spent on panda conservation in China. Don’t get me wrong, I don’t disagree with large amounts of money being paid by zoos into the conservation efforts for a severly endangered species (even if that species seems just completely out of wack with natural selection when it comes to its breeding/birthing process). I just, and maybe I’m wrong, don’t trust the Chinese powers that be to be responsible with it. “Conservation” is a term that has a somewhat alternative definition when it comes to China. I’ve not been to Sichuan and seen the panda conservation parks, but if they’re anything like the Siberian tiger “conservation” park that I went to … a lot is left to be desired.

You might have noticed I’ve put some ads on my site for my provider. I’ve been asked a few times about them, and as I’ve always had good experiences with them (cheap price, competitive services, ultra-fast responses to help issues), I’ve decided to become an affiliate of theirs. So, if you are currently hosting your site on some free service, messing around with free photo hosting sites with size limits and bandwidth limits, but you thought like I did that it’s REALLY expensive to have your own server to avoid all that crap – nope. It’s $6/mo. for hosting plus $5/yr. for domain (that dot.com thingy that you type into the address bar) registration.

For that you get 750 MB of storage, unlimted customized e-mails (ie. [email protected]), FTP accounts, 15 GB of bandwidth (that’s how much stuff people can download per month from you). It’s not bad eh?

For more details, check out the page I’ve set up for a bit better explaination of everything, or use your mouse on the colourful box-like links that go directly to a non-G00gle related page, but rather a page for additional information about what I’m talking about.