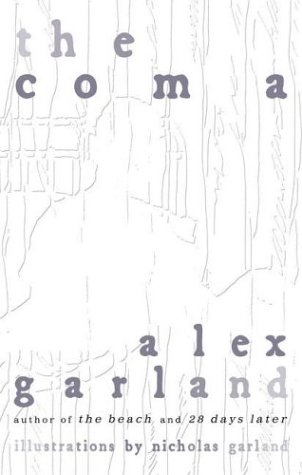 Having recently finished Foreign Babes In Beijing, I decided last night to reload my nightstand with a new novel for my wake-up reads. I consulted my big pile of books I brought back with me from Canada and settled on one I had nearly forgotten about: The Coma by Alex Garland.

Garland, for those that don't know, is the famed British novelist responsible for The Beach – which was even more famously turned into a movie by another UK-great, Danny Boyle. I love Danny, and in turn have ended up generally loving Garland's work (the pair worked on The Beach together, Garland wrote Boyle's 28 Days Later screenplay and is currently penning out his latest flick, Sunshine). He has a voice that's easy to connect with, which is important, because his stories tend to wind rather twistedly through his imagination.

The Coma offers no break from the somewhat surreal. The jacket summary reads as follows:

"When Carl akwakens from a coma after being attacked on a subway train, life around him feels unfamiliar, even strange. He arrives at his best friend's house without remembering how he got there; he seems to be having an affair with his secretary, which is pleasant but surprising. He starts to notice distortions in his experience, strange leaps in his perception of time. Is he truly reacting with the outside world, he wonders, or might he be terribly mistaken? So begins a dark psychological drama that raises profound questions about the boundaries of consciousness…"

That makes the book sound a bit more exciting than it actually is. For me the value of the book really came in the way Garland captures the dreamscape we've all felt but can't describe. He sums it up well by saying:

"Everybody dreams. Everybody dreams, but nobody has ever managed to tell me what their dream was like. Not so that I really understood what they saw or felt. Every dream that anyone ever has is theirs alone and they never manage to share it."

Though spoken by the protagonist, it could easily be Garland telling the reader why he wrote the book.

All that said, and despite rather enjoying the book – it was 200 small pages of large type. I read it in under two hours. Now, I am not a fast reader. I meander through a book like some people stroll by a river. I take my time, lose my train of thought, start thinking about other things and have to backtrack whole chapters. So, to finish a book in a month, never mind a morning, is somewhat unusual for me. I don't feel overly connected to the character, and I didn't really have enough time to absorb the material in the plot. Despite delivering an interesting concept, I think it all just happened too fast. 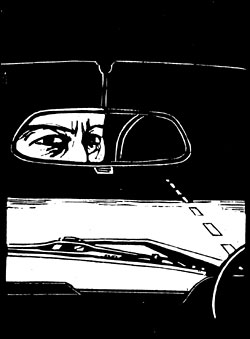 A cool thing that took up quite a few of those airy pages was the inclusion of illustrations by Garland's father, Nicholas Garland. The elder Garland's monochromatic woodcuttings add a comic book quality to the novel that seems to suit its somewhat dark, confused and dream-like atmosphere.

The one thing that really pissed me off about the book was its price. Now I side-stepped this by only paying the Coles' discount price of about $7, but the cover price for this hardcover on initial release was $29 CAN ($19.95 US). As I said, I didn't pay this price, and perhaps many don't, but it insults me none the less. As a "writer", I am all about authors being paid what they're worth, and that usually means they're being paid less. However, at some point that price becomes a bit ostentatious. Garland is a successful writer with critics hailing him as this century's Graham Greene. He's got a loyal fan base and his publisher knows that his books will sell well. On top of that, his first two novels were turned into films, giving him some additional cash there.

I mean, lets price compare for a moment. I'd be hard pressed to finish reading a copy of FHM in two hours – price $6. With most movies now weighing in at about 2.5-3h, that's some good entertainment at a price point of around $15-20. Now, you take a look at the backends of these two comparisons, knock out marketing as I think that's respectively level, and you have a magazine that has photographers (with the tough job of capturing buxom beauties), a massive staff (pun intended), freelance writers, etc. The movie … well, I think Hollywood lets us know all-to-well how much their badboys cost. Needless to say, its a helluva lot more than some guy, a computer, an imagination and a bit of editing.

I realize that Garland has little to nothing to do with the cost setting of the novel, but his name is on the cover and its his idea and prose that gets tainted when the publisher over-values his words. What it's done for this fan is made me painfully aware that his books are likely to be over-priced, fast reads. And if he, and his publisher Penguin, thinks I'm going to shellout $30 for something that will be a dust collector after 120 minutes of use… Carl's not the only one dreaming.