Right… so I think I totally confused the guy where I buy beer today. I gave him back the bits of cardboard that vouched that he owed me 2 kuai for the refund on the four bottles of beer I bought the other day… the problem entered when I bought him all 10 bottles that we had lying around the apartment. He kept looking at the bits of cardboard, going to the cash register, looking again at the bits of cardboard, looking in the bag full of bottles and counting… this little circular theatric went on until he eventually sighed, handed me some coins, smiled and (I can only imagine) willed me to leave the shop as quickly as possible. Damn lao wei, too much problem.

Speaking of confusing experiences… yesterday I decided to get my hair cut before my big night out on the town last night. I knew that there was some haircutters in the complex of apartments I live in, so I go to leave and can’t open the door. Fine, Tom, the security conscious guy that he, is locked the door when he left for school – no big deal. I slid my key in the door to unlock it… turn… nothing. I jiggle it a bit, turn… still nothing. Panic begins to creep in… Yes folks, I got locked IN my house. A quick call to the school and Doris promises she’ll call back with a solution. Sherry calls back a few minutes later and says that there will shortly be a man out my front window and 7 stories down waving… throw him my keys and he’ll get me out. Sure enough, a man appeared, I through him my keys and he came up all 126 stairs and got me out. The poor bastard. Damn lao wei, too much problem.

Anyway, so I finally go out and started looking around for a haircutter. I walked up to a shop that had a big sign that said “Beauty Salon (along with a number of Chinese characters)”. There was a truck driver out front… so I mimed cutting my hair and pointed at the building… he shook his head and mimed rubbing his face. Now, I’m not entirely sure what he was telling me, but I got the jist that it wasn’t what I was searching for. I then mimed (I mime a lot here) the question of whether he knew of any haircutting places around here… he sort of shrugged and began walking away.

Assuming he had lost interest in me, I began walking in the opposite direction… when I hear, “Hello, Hello!” from behind me. He hadn’t given up on me at all… he found me a little hair salon around the corner. So I go in… and I’ll not go into all the details of the process by which I managed to get my haircut with not a common language between me and my friend with the scissors… but it got done. It’s not fantastic – but for $0.75, I’m not going to complain.

I took a shared taxi into Dalian and met up with the other teachers I took orientation with. We headed to what I believe was called the German Beer House (literally the first place with food that had someone in the street asking us to come in). It was a pretty amazing place… sort of done up to be Western-style, but with a decidedly Chinese flavour. The first thing that surprised us was the lack of chopsticks and availability of cutlery, the second (and much more appreciated) was the dark ale they had in pitchers. After a bit of circular conversation trying to sort out what we were going to eat, we went with the only thing that was actually offered to us… basically for 33 kuai a head they just kept bringing us stuff skewered and BBQed. We had S. American style (whatever that is) sheep’s leg, chicken hearts, cow’s tongue… and a bunch of other equally delicious bits of animals.

After dinner we headed down the street to a KTV bar, or Karaoke Bar. My experience with Karaoke to this point was really just limited to my Friday nights at the Schnitzel Tavern – I was amazed at the seriousness that these folks put into their Karaoke. For 78 kuai/hr. you get a private room with a big couch, a TV and computer screen to pick songs. We spent the better part of our hour trying to figure out the Chinese controls for selecting songs – but did manage to get in some wonderful renditions of “Leavin’ On A Jet Plane”, “My Way” and “Dancing Queen”.

After coming dangerously close to a second hour at KTV, we exited the Castle of Karaoke and went to a bar next door for some more drinks. The bar was pretty empty, but good fun regardless. It was nice to just hang out with some fellow teachers, getting opinions on our first week, our plans in the upcoming weeks, etc. After some chat, some beers and a bit of magnetic darts we called it a night. Brian and Joanna were kind enough to lend me their couch for the night, so the three of us along with Josh and Christie (who also live in the apartment building) headed to their place for some more drinks and chat. We crashed out at about three… and first thing this morning I found my way back to Jinzhou.

It was a great night out, I mean the stuff we did was alright, but it was really the people it was done with that made it so much fun. They’re all a really good group of people – and from all over the globe, so it gives some nice variety on views and perspectives.

One thing I was surprised about was the size of Joanna and Brian’s place. Not that our place is huge here in Jinzhou – but there is quite a bit more room. The bedrooms seem to be about the same size, but the kitchen and living area are a world different. I am hoping to have everyone out here next weekend for another night out – in the comparatively inexpensive Jinzhou.

The night was about as expensive as you can get, as we went all out on dinner, booze and everything… and even with the 30 minute taxi rides in and out of Dalian… didn’t cost me more than $15 or $20. 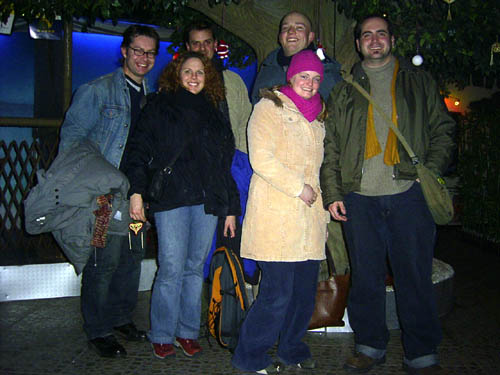 Today I went hunting for a DVD player. I finally grew tired of wrestling with VCDs of questionable quality and looking at Tom’s DVD collection sitting by the TV, just taunting me. My search led to my first visit to Kai Fa Qu (Kay Fa Tchu – or The Development Zone). Sherry (who lives there) took me to this huge shopping centre/mall thing that was just incredible. It was a massive five floors of shops, plus a big superstore in the basement. I found a compact little unit for 299 kuai and am quite happy with my purchase. Electronics aren’t all the much cheaper here (cell phones are a fortune!), but 299 yuan works out to about $45 – so, not too bad.