Alright, Lisa might not be world-renowned yet, but she’s well on her way. And she’s certainly a well-known fixture in the China expat/blogging circle.

Perhaps best known as “Other Lisa” in the comments at the Peking Duck (or @otherlisa on Twitter), Lisa’s a long-time blogger (her blog, Paper Tiger Tail is one of my favs., she was also a past contributor at the Duck) and has the distinction of having seen a side of China most of us expats have only read about in books. 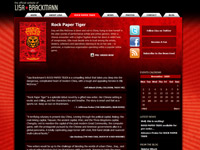 Lisa was one of the first and few foreigners who entered China directly following the end of the Culture Revolution (read about it here, it continues to be one of my favourite blog posts gracing the ether). She is aÂ fascinatingÂ woman, and so when she asked me to design a Web site for her soon-to-be-released book, Rock Paper Tiger

, I jumped at the chance.

The site was launched early October, corresponding with her novel becoming available on Amazon for pre-order

. As is the case with so many people I work with, I had never met Lisa in person, at least until this past weekend. Currently travelling through China, she swung by Suzhou and hung out with Maggie and I for a couple of days.

It’s always great having people come visit Suzhou as it gives us a chance to dust off our tourist caps and take in a sight we hadn’t yet seen in our three+ years here. With Lisa it was the night cruise of the Suzhou canal. I was a bit apprehensive that the night cruise would even be open in the winter months, but a quick phone call to the boat operators and we were in business.

The biggest problem I had with it was the seating was clearly designed for slim Chinese frames — had I not had proper leverage, I’m sure the chair would still be stuck to my ass. The deck was enclosed and heated, a bonus for the chilly November weather, but the glass windows made photos without reflections nearly impossible. What the enclosure gave in protection from the elements it took in visibility, and would have much preferred an optional open-air deck that afforded better views. There was a small spot on the bow, but after some Chinese dude trying to impress his girlfriend stood in front of the captain, we were banned from it.

The route was alright, but not as comprehensive as I would have expected. I sort of thought 70 minutes would have taken us around the entire outer canal of the old city (it surrounds the city like a moat and has been in place for about 2500 years). Instead we journeyed up the southern leg of the canal, and then turned around and backtracked. The tour operators tried to distract us from this redundancy with a musician plucking a sÄn xiÃ¡n and belting out some rather discordant (to my laowai ears at least) Kunqu, the local opera style.

The second leg of the route was slightly improved, as we headed up the western side of the city towards Shantang Jie, the spot you see in virtually any collection of Suzhou photos (here’s mine). It was cool to see at night — with virtually every building in the area lit up like a Chinese-inspired Christmas decor.

Here are some photos: 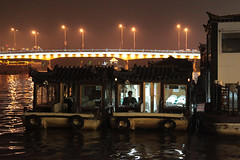 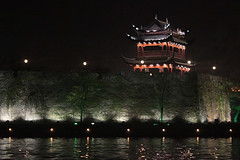 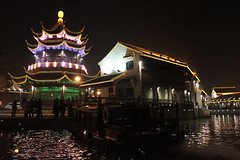 As I said, I’m not sure the 60RMB was justified, but I’m happy to have crossed it off the list of things I’ve been meaning to do. Having the opportunity to finally meet Lisa in person and get her thoughts on the changes in China, US political situation and life in general was priceless.

Be sure to pre-order your copy of Rock Paper Tiger

, and let me know what you think of her site.