It’s been brought to my attention that I’m not updating enough, so much so that friends have begun to worry that something has happened to me (sorry Zak!).

Something has happened to me, and more on that later, but that is not the reason for my blog absence. I’ve simply been inundated with new projects. That coupled with a quick trip up to Dalian last week that left me without Internet for a few days, has kept me focused on other things.

Busyness has been a theme of late, a fact that has been reflected in my decision to step down as CNET Asia’s China blogger. It was a great gig, but when forced to choose between spending more time developing my own projects, or writing for someone else’s blog (even if that someone else is CNET), the choice wasn’t really a choice at all.

And while the Tech Dynasty may be finished, it has been replaced by the already excellent Sinobytes — written by my good friend Steven. You can still find all of my Tech Dynasty posts here on The Humanaught.

So what the hell have I been up to?

Looking at the last time I updated the portfolio page on Dao By Design, one would think things around DBD had stopped completely around a year ago. Very much the opposite is true. I’ve simply been too tied up with stuff to pay the site much attention. Cobbler’s children and all that.

And while a DBD site and portfolio update are well past due and soon on the way, I would like to take a minute to draw attention to some of the awesome projects I’ve had the good fortune to work on lately. There are a number more in various stages of development, and I would love to share them — but they’re just not there yet. Expect more frequent updates on projects I’m working on though. Until then, please check these out: 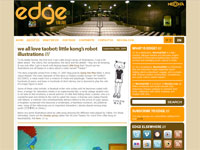 I enjoy most projects I work on, but it’s always great to get involved with a truly rad group of people. The Neocha guys are just that. Neocha, for those that don’t know, is a large Chinese-language social network focused on creatives in China. NeochaEDGE was launched as a platform for the site to highlight some of that talent to a wider English-speaking audience. 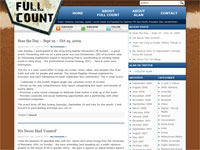 It’s not every day I get to design the blog of someone as high-profile as Alan VanderMolen. It was good fun though, and helped along by the clear baseball theme I was able to work with. Alan’s blog is a must-read for anyone involved in the PR and new media scene in Asia. 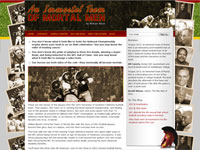 Continuing with the sport-themed sites, Trojans 1972 â€“ An Immortal Team of Mortal Men is a new novel by Bill Block, and while I don’t know the first thing about football (us Canucks play football with skates, sticks and pucks), putting together the site was a great excuse for me to re-watch Any Given Sunday for a bit of inspiration — I think I’ve also finally figured out what a “first down” is. 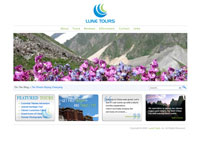 Lune Tours: Lune Tours provides customized travel arrangements in China to suit our clientsâ€™ requirements, expectations, and passions. We specialize in taking our clients hopes and visions for their China trip and making them reality.

Few Web sites were harder to design than this one, not because of technical difficulties or the requirements of Lune Tours founder Jeff Levinson — a great guy — but because it’s impossible to read about all these great trips in China and not want to shut down the computer, pack up a pack and hit the road. 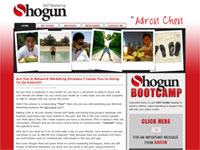 Shogun 360Â° Marketing: Every man is an architect of his own fortune.

When approached to build the blog of network marketing guru Aaron Chen, I must admit, I was a bit apprehensive. You can’t work online for much time without bumping into (and, in turn, considering) the all-promising world of multi-level marketing. And while I have mixed feelings about, and a mixed history with, the industry; Aaron’s gone a long way to showing me it can be done with integrity, knowledge and enthusiasm. Even outside of financial independence seekers, his posts and videos are informative and interesting. 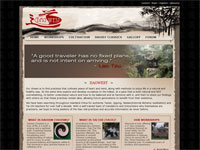 Daowest: Daowest’s dream is to find practices that cultivate peace of heart and mind, along with methods to enjoy life in a natural and healthy way.

From the jet-set lifestyle of Aaron Chen, to the quiet and tranquil Daoist retreats of Daowest — the DBD portfolio is nothing if not diverse. Much like Lune Tours mentioned above, it was tough to sit still long enough to get this site done, and not run off to Sichuan and climb a holy mountain.

… and for the good of my soul… 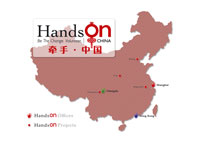 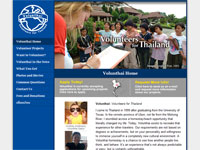 Hands On China and Volunthai: It has always been my mandate to volunteer a certain portion of my time and abilities to non-profit organizations that are doing work I support. Such is the case with both Hands On China, a network of groups organizing volunteer activities in China; and Volunthai, an organization that puts adventuresome Westerners in Thai homestays were they volunteer English teaching to rural Thai schools that couldn’t otherwise afford them.

With both projects I didn’t have much to do with the original design of the site, but more was brought on to facilitate some freshening up of both design, structure and code. For Hands On China this, among other things, involved creating a template they could use when expanding to other cities; and for Volunthai this meant taking an older static site and bringing it into a modern CMS-based system.

I’d love if you’d give both of these sites a look — not to enjoy my handiwork (which is mostly behind the scenes anyway), but because they are great organizations and always in need of volunteers.