Alright, I know this is sort of out of sequence, but I really didn’t have the time until now to put an entry, nor the photos, together. However, I journaled this on the trip home from Hainan – and so here it is reproduced from paper, and accompanied with photos from the wedding set on Flickr. 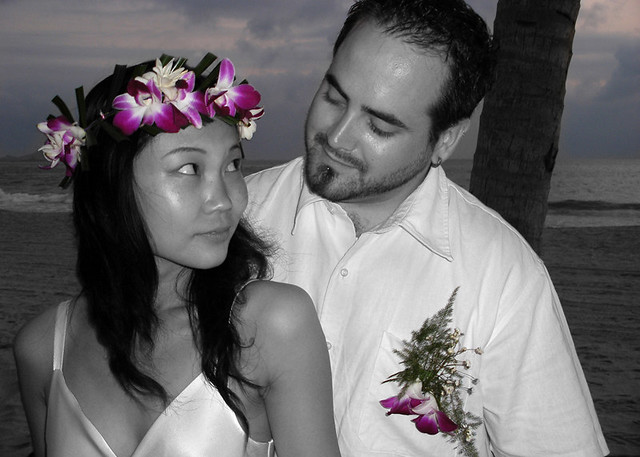 Leave it to me to forget my journal behind in our rush to get to Shanghai’s Pudong Airport.

A wedding, greeting my family, introducing them to my bride, 20 some-odd plane tickets and an equal number of hotel reservations, a trip to Hainan and one on its way to Thailand… it’s bound to make a guy a little forgetful.

So, here I am, last day in Hainan, now officially -unofficially- wed. I’ll admit, for a while there it was looking like we might say “fuck it” to the whole thing.

After a night in the shady outskirts of Eastern Shanghai, we caught our flight to Haikou – Hainan’s somewhat unmemorable capital. The equally unmemorable night spent there passed quick and by 9:20 the following morning we were on the road south to Sanya and its sunny beaches.

After the three hour bus ride, we dropped our bags at the apartments (that looked remarkably like hotel rooms) and dropped our family at the beach so Maggie and I could start planning our wedding (last minute what?).

The major problem with doing an alt.style wedding in China is there’s no precedent and no infrastructure for it. We arrived in Sanya with no idea where the wedding would be, and carrying a laundry list of problems to solve. Day one was a bust, as our trip into the downtown only netted us a crap solution to the music problem. The only thing we could find that might give our ceremony an aural component was a little ghetto blaster heavily priced at 700-1,000 RMB.

A $100+ for a piece of crap boom box that was likely to do nothing for allowing us to hear the wedding music seemed steep.

So, we returned, defeated, hoping we’d have enough hours before sunset the following day to get it all done. 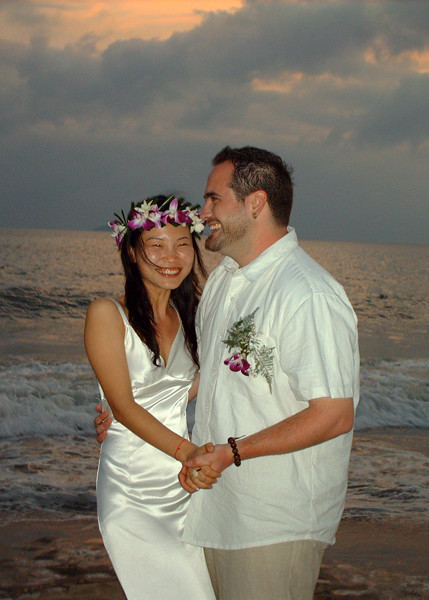 The next morning we headed out to the beach to attempt and find a spot to host things. our energy wanned quickly when after walking a long stretch of the beach we found no areas that really matched my vision of what a beach wedding should be – namely, not having a busy road in the background.

We got snappy with each other – the pressure of the last couple days got released in the form a a major blow-up. It took some time, but we got over it, sucked it up and on the walk back found a small grouping of palms that would do.

We then headed to town to make our second attempt at finding a music solution – as well as flowers/decorations, a cake, some good wine and a place to have the reception.

After walking somewhat aimlessly around town, we found ourselves in an electronic shop looking (again) at over-priced little CD/tape players. We were walking out, facing defeat again, when I caught sight of a small portable amp – with a built-in wireless mic!

We tested it out and it pushed the sound much harder than the little CD players, AND it came complete with a 1/8″ to 1/4″ cable to plug in a CD (or as was our case – an MP3) player – score! The other benefit was that it was nearly half the price of the other option – only 450 RMB.

We then found a flower shop where we bought a bunch of bamboo and flowers to attach to them. The cake was meant to be for someone’s birthday, but worked well enough (after removing the ‘ç”Ÿæ—¥å¿«ä¹‘ sign).

By 2 pm we had pretty much expended what little energy we had, but were riding high because, for the first time, it looked as if it might all come together. 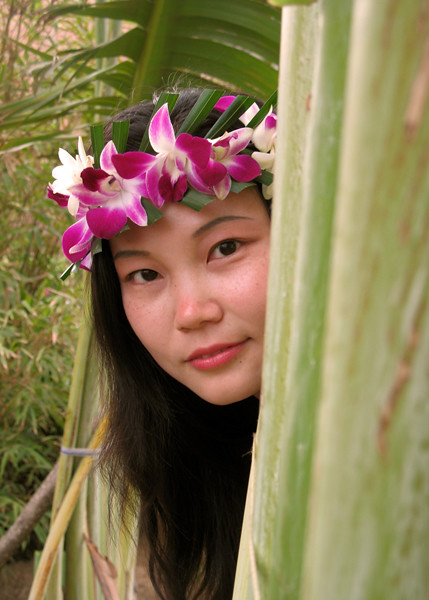 We got back to the room, got changed and all met down stairs for some photos in the gardens surrounding our hotel. After the pictures we headed to the beach. Setup was a nice collaborative effort with some tying flowers to bamboo and some digging them into the ground. Maggie and I got to skip out on most of it, as my sister had been put in charge of photos, and she told us we were needed in the last rays of sunlight.

When sunset finally came we began the ceremony. Despite a rather large amount of wind, and me butchering the Chinese version of the vows, it went off without a hitch.

We decided to do the vows bilingually, but hadn’t had the time to memorize them – forcing us to read them from a piece of paper that did its best to fly away.

All in all I think it was a ceremony that matched my vision – if not in the details at least in essence – that I had for my wedding day. The amp even allowed us to have a wedding dance to “The World Exploded Into Love…” – our “wedding song”.

From the beach we headed to a nearby seafood restaurant for our reception. Choosing a place was hit or miss – and largely I felt we missed. The food was alright, and the service about the same, but “alright” is not the term you want to describe your wedding with – so, a day later, upon finding a wonderful restaurant for Spring Festival Eve dinner, we had a second take on our reception. Some fantastic food, great service and all in a beautiful private room. 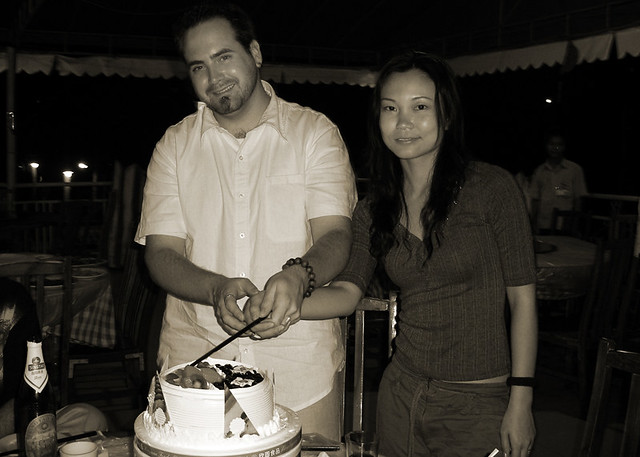 The rest of the night was spent watching the massive amount of fireworks running the length of the beach from the balcony of our hotel room.

Maggie and her mom missed out on the fireworks in exchange for a reasonable bedtime to help with catching their early-morning flights to Shenzhen (and then on to Shanghai and Dalian respectively). I was a bit put-off by their exit on what I thought was such a signigificant part of the holidays… but endless bangs and mono-colour flashes have grown old after my third… I can’t imagine the depth of disinterest that must form after 27, let alone 52, years.

So, I’m married. I guess I’ve had time to get used to it since taking care of the legal side back in December – but now I’m 100% married.

I keep figetting with my wedding band and trying to figure out what it means to be married.

I’ve been asked if it feels different. After living together for so long, as much as I had been expecting to answer the question with a “not really” – the truth is… I do.

Not in a way that is easy to define. It’s different in a subtler way that is more just to do with knowing I’ve entered a new period of my life – a period that comes with an equally new set of responsibilities and wonderful possibilities.

Honeymoon entry will be transcribed ASAP. Don’t forget to check out the Wedding Photos Gallery.