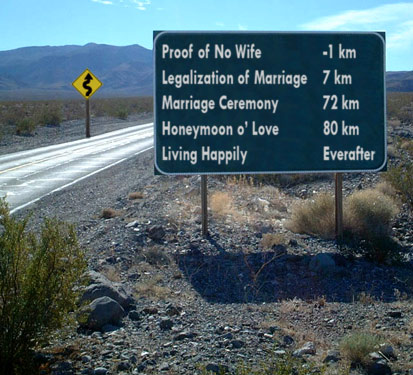 Alright, I've started a new category here at Adventures of the Humanaught. The Road to Wedlock category will chronicle my journey towards marriage, in hopes that it might help any other poor saps looking for information on this rather complicated process. This category should cover the gambit from first kisses to "æˆ‘æ„¿æ„s"…

So, I just returned from Shanghai, having completed the first step in the marriage process. Wait, I guess the first step was that fateful meeting nearly two years ago… or was it when I decided to stay in China? Or when I popped the question? (you're starting to see why I have a category for this now).

Anyway, the first step in the legalization of our marriage was done today. I had to trek all the way to Shanghai to get a certificate that verifies that I've not got a harem of wives in Canada. Oddly enough what I got was a piece of paper that says: "Canadian law neither requires nor provides for the issuance of such certificate."

Huh, helpful. But I guess it'll do, as it's got a nice blue Canadian Consulate General stamp on it (I am supposing they chose blue to break from all the red stamps being thrown around the PRC) and I paid 345 RMB for it. Try to figure that one out. As much as I complain about a certain government screwing over certain citizens of this dear country I call home… my government takes the cake. They managed to papercut my anus from 11,341km away. Bastiges. I mean, $50 CAN for a girl to print off a pre-written form, stamp it with the pretty blue seal and sign her name stating she witnessed me sign it.

And she didn't even witness it! She handed me the form, said read it over and if it was ok, sign on the line. Then she left the room. I mean… I could have had anyone sign it while she wasn't looking. But even if I did, what would it matter… the thing isn't even what the government of China wants; namely verification that I'm not already married.

Allegedly this is all copacetic however, and I'll not encounter any problems when I present it to the marriage office in Dalian sometime in the next two weeks, when we, at least under the eyes of Chinese law, become married.

The expensive and rather long trip to Shanghai (long in that the business I needed to attend to took all of three minutes – including my trip to the Canadian consulate's toilet) did yield one very positive thing – FAJITAS!

The Consulate General of Canada happens to be located on the 6th floor of a rather swanky tower connected to a rather swanky hotel. As both places tend to cater to foreigners there's a grocery store on the premises that is completely stocked with every Western thing imaginable. I was lucky I came away with only a package of tortillas, cheese, some seasoning and salsa. Had I stayed much longer I might not have been able to afford the train ticket home for having purchased curries, deli meats, $10 boxes of cereal…

Oddly enough, of the very few places in Shanghai I've been, this was the second time I'd been to this shop. The tower that the Canadian consulate is in also happens to be the home to the theatre where my former roommate Freddy, my good friend Vanessa and I all went to see the Chinese acrobats on my first trip to the city. Guess they lump all the suck-money-from-foreigner things together.