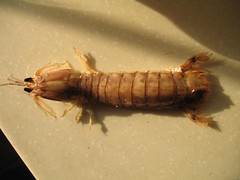 As many of my friends pack up and head out to face the torrent of travel over the May Holiday, I’m just happy to finally have a moment to sit down and type randomness on here.

My mother-in-law arrived from Dalian Thursday evening and while Maggie and her enter day three of non-stop-family-gossip, I’m hiding out in my office and finally getting done things that have been on my todo list so long they could be sold at auction.

First things first – what the hell is that sea creature in the picture above? Never was a piece of seafood that called into question the civility of eating any of the sea’s tasty and entirely creepy looking critters more than that. Maggie’s parents, being the amazing people they are spent the night before her mom travelled here preparing an entire suitcase full of food for us. 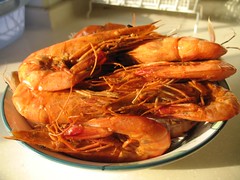 A plate of tasty dongbei prawns

Knowing their daughter’s and her laowai husband’s insatiable love for seafood, and Suzhou’s lack of it; they packed up fried fish, squid, a bunch of the unidentified seabugs above and absolutely massive prawns (about 6″ from tip to tail). For good measure they also threw in about 5 packages of dried squid jerky (surprisingly tasty snack), a big chunk of beef, some sausages, and a few pigs feet (I love my wife, I do, but if ever there was something that called that into question – watching her chew through the hoof of my bacon would be it).

Maggie’s mom will be here for a week, which is great. I know Maggie’s parents worry about her living so far away from them, and so it’s good for her mom to be a bit of an ambassador for our lifestyle here. Already we’ve impressed her with our apartment, the relative tranquility of our neighbourhood, and the cuteness of Button (who can’t get enough of the attention she’s getting).

I’m not sure where it comes from, and I don’t know if all son-in-laws feel this way, but assuring Maggie’s parents that we’re safe, secure and sufficiently well-off always weighs heavy on my mind.

Maybe it comes from the fact that they’ve bucked many Chinese-in-law stereotypes and so graciously accepted me, a foreigner, as part of their family. Never have they made me feel different, nor have they ever criticized or “warned” Maggie about the evils of getting involved with “laowai”.

They are traditional Chinese parents in so many ways, but in this they feel a bit different, at least different from what stories I’ve heard from others. I appreciate that more than I can express, and perhaps my desire to put any fears they may have (real or not) to rest stems from that. 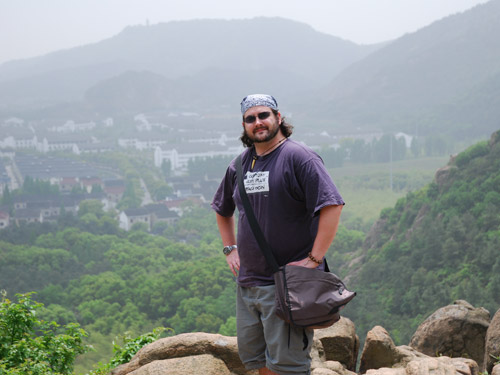 Me, about halfway up Tianping Shan - taken by Elvina.

Mags and I headed to this hiking spot with friends Glen and Elvina last weekend and quite enjoyed it. Suzhou’s littered with great little day-trips that allow you to break from the haze and monotony of city life, unfortunately I don’t take advantage of this near enough.

TiÄn PÃ­ng ShÄn, while dubbed a “mountain”, is more a big hill on the south-western fringes of Suzhou in the small hamlet of Mudu. A couple years back we headed to another big hill in Mudu called LÃ­ng YÃ¡n ShÄn (çµå²©å±±), and were keen to repeat the hike (my flabby ass needs the exercise).

What we hadn’t counted on was that in an effort to attract the under-marketed to (for hiking at least) under-agers, TiÄn PÃ­ng ShÄn was hosting a big cartoon character festival at its base. After an hour on an insanely cramped city bus, wading through crowds of kids all vying to get their picture taken with a rather poor representation of Winnie-the-Pooh was a bit to deal with.

Thankfully kids make whiny climbers and so most parents opted to keep them off the actual mountain — there were a few brave parents that balked this convention and were rewarded with having to piggyback their little split-pant nose-picker up and down the mountain.

As with every Chinese hike up a “mountain” I’ve ever been on, stairs had been carved the whole way up. Emboldened by having friends with us, we decided to off-road it a bit and found our own boulder-bounding path the majority of the way up. The trip was a lot of fun, despite forcing me to recognize just how out of shape I am. Pear-ish is a shape, right? It was also a great experience hanging out with Glen and Elvina. Glen, some may have noticed, has also recently joined the writers over at Lost Laowai.