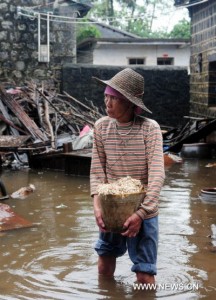 According to Wikipedia, Haikou’s rainy season falls between May and October, with the most rain in September. We knew moving down here in April that we were essentially moving into heat and wetness. We waited for the rains all summer, not out of excitement but out of curiosity regarding this new and strange climate we were living in.

Nothing came. Day after day we had beautiful blue skies, fluffy white clouds and only short, scattered showers. Getting closer and closer to the end of September and still no rain, we thought maybe we skipped the rainy season this year.

But then a week ago typhoon Nesat hit, and it hasn’t stopped raining since. The 24-hour period from this Tuesday and Wednesday past saw more precipitation fall on the city than ever in recorded history (333mm). So yeah, we’re wet.

Over 5,000 residents in the affected villages have been evacuated to schools and other temporary shelters, and the local government has distributed blankets and other relief materials.

The city has experienced record rainfall, receiving 236 mm of precipitation between Tuesday morning and Thursday afternoon, according to the city’s flood and drought prevention office.

Dozens of the city’s small- and medium-sized reservoirs are discharging water to ease pressure.

According to a provincial weather forecast, the downpours will continue to pound Haikou and other eastern areas in the province over the next two to three days.

This morning the rain had stopped (more, slowed to a sprinkle), and so I took Casey and Button out for our regular walk around the neighbourhood (read: chance for Maggie to sleep in). After dodging some large puddles and getting most of the way around the block without problem, we came across an odd scene. Two men were standing in the bike lane with a bucket, picking up fish.

Trying to puzzle out what was going as I walked past them, I then saw that the small pond/reservoir–that usually has at minimum 4-5 feet from surface to its concrete lip–was overflowing and the small minnows were swimming out with the stream and down the storm drains on the road. 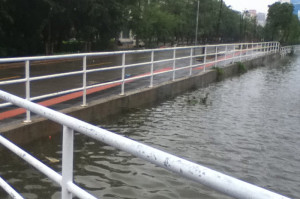 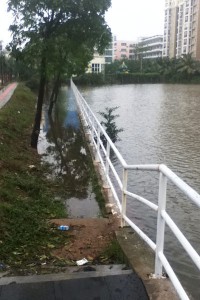 In the first photo above you can see the water level nearest the foreground is about 12″ from the concrete edge, there is usually a 3-4 foot drop before the water here. The next photo shows where the edge drops down a bit, and where the water has begun to overflow.

We seem to be fortunate where we are though, as our friends Nicki and Erik are only a few blocks away and this is what the road outside their apartment looked like a couple days ago: 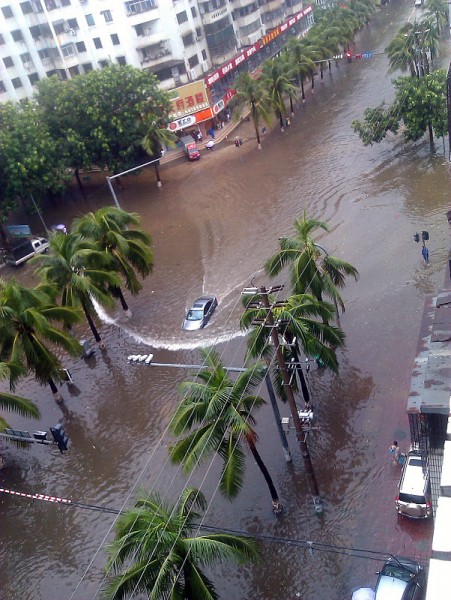 As I write this, the rain has stopped, the road outside our apartment is drying and the sun is trying its best to make an appearance, so perhaps we’ve seen the worst of it. I love rain — the sound of it, the smell of it — and even these extremes haven’t really bothered me. But with a week of no sun and no dryer, I am quickly running out of dry clothes.