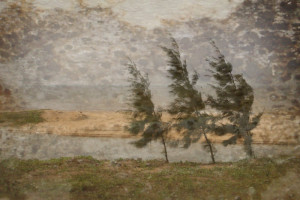 As this has been our first winter in Haikou, I wanted to hold off with this rant public service announcement until I was confident it wasn’t just a passing thing. Unfortunately, I think I can confidently state, on the record, that Haikou winters suck.

Crap winters aren’t something new to me. Growing up in Southern Ontario, I’m used to cold, slushy, sleety, snow-filled months from the end of October until the end of March.

The problem with Haikou winters isn’t even really the cold. The mercury shares its time riding just above and just below the 20°C mark, and so isn’t really “cold” by this Canuck’s standards. However, it’s not so much the (lack of) heat, it’s the humidity. I don’t think I’ve been dry since December.

Six or seven years ago I spent a week on Koh Chang in Thailand at the height of the rainy season. It was warm, so the rain itself wasn’t much of a bother. I could still swim, drink and hang out in a hammock — my primary vacation activities. And generally, I quite like the rain. However, what I discovered my 3rd or 4th day, after running out of dry clothes, is that being permanently damp ranks up there with mosquito bites on the under-arch of your foot and canker sores.

That was a week. I’m now going into month three of living in a cloud. Every day I wake up to what looks like a rainy day, but it never rains. The ground is wet, our balcony is slick with a thin layer of water and the ants continue to migrate from ground to kitchen counter — but no rain. The air just sort of sits there and makes things moist.

I’ve lived in several apartments in China that have come with a clothes dryer, but sadly our place in Haikou is not one of them. After months of waiting days (often in vain) for clothes to dry on the line, I’m pretty certain I would trade Casey (or at least Button) for a few spins of warmy dryness.

On that rare day once every week or two that the sun makes an appearance, our community instantly transforms into what looks like an elaborate yard sale — specializing in textiles. Every balcony fills with hangers, every tree gets a line tied between it, every shrub that can support the weight gets loaded with blankets and pillows. Children run and laugh; adults breathe a long, deep breath of air, the first in a while that doesn’t smell like a dirty gym sock.

But it doesn’t last. All that sunshine coaxes out the moisture that has permeated every pore in the city, and it isn’t long before once again you’re able to wash your hands simply by waving goodbye to that distant warm glowing orb in the sky.

One thing that does love all this moisture is mould. It’s everywhere. The spot just under your windows that the sun never reaches — mould. That box of old clothes in the spare closet — mould. I pulled out a leather-bound journal of mine off the bookshelf the other day and its cover had sweatered up. The smell of my apartment alternates between the scents of “Musty Basement” and “Sterilized Hospital”. The battle is endless.

The end is nigh

We moved to Haikou last March, and only briefly experienced this cold dampness, so I can only hope that the pattern repeats and we’re coming out of the clouds (so to speak).

I suppose this is the penance we’re required to pay for the other 2/3rds of the year where the weather is pretty stunning. If ever there was a case for moving 2 hours down the tracks though, Haikou’s winters would be it. Sanya, only 250km to the south, suffers hardly any of this. Never in my life did I think that decision on where to live would come down to sunshine or supermarkets.

In the end, supermarkets won out. Despite the nicer beaches and better weather, giving up our apartment and the easier access to amenities proved too difficult. We’ve renewed our lease for another year here in Haikou — I think I’ll be buying a dryer before next winter though.

Oh! The sun just came out … I’ve laundry to do before all the best bushes are taken.