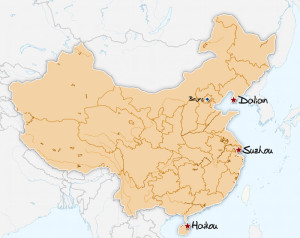 The places I've lived, or will live, in China

After more than four and a half years, we’re leaving Suzhou.

So much has happened to me since moving here from Dalian in 2006: I got married, I started a new career path, I got a dog, I had a son. In my adult life I’ve not lived anywhere as long as I’ve lived in Suzhou.

But the time has come to move on to some place new, and what better place in this country than China’s vacation mecca — Hainan Island.

Many close to us know well that we’ve half-made plans to move down to Hainan several times over the past several years, but always changed our minds before things developed too far. First it was deciding to have a baby and wanting to be close to a decent hospital during the pregnancy that cancelled our plans to move south. Then it was not wanting to leave our wonderful support network right after having a baby that put the migration on hiatus. It is this reason that I’ve been reluctant to blog about the decision, fearful that I would have to retract this type of post for having changed our minds.

But now, our flights are bought, accommodation arranged, and with us 10-month veterans of parenthood, we feel we’re ready to embark on this long-anticipated next chapter of our lives. Nothing about the move is easy though — I suppose it never is. Since coming to Suzhou we’ve moved multiple times, having lived in five apartments straight across the city, and every time it was a pain in the ass. But this is the first time we’ve had to cart a fussy kid, a big furry dog and a long-collected pile of mostly useless (but strangely sentimental) stuff across more than 1600km to the southern most end of China.

Initially our plan was to head down to Hainan and sort out an apartment, come back to Suzhou and get our affairs in order, and then pull the trigger on the move. Time, money and a lack of enthusiasm for having to make multiple trips with a 10 month old inspired us to take a leap and just head down in one go.

When we arrive we’ve arranged to stay for a week in a small one-bedroom apartment rented per night like a hotel (but unlike hotels in China, we’re able to stay with our dog). From there we’ll hopefully find a place we like quickly and be able to move in before our stuff arrives via moving company at the end of the week. It may seem tight, but we have some flexibility in that we can stay longer in the apartment and our stuff can be stored at the moving company’s depot should either be needed.

We’ve yet to decide whether we’ll move to Sanya or Haikou, and will likely be looking at places in both cities, but are heavily leaning towards Haikou. What it lacks in beautiful beaches, it seems to make up for in being a proper city, and not just a scruffy third tier town with rows upon rows of newly built high-rises crowding its beach front. The only question mark is — and it’s a bit of a biggie — we’ve been to Haikou just once and then only for a short overnight stay, so really have no idea about the place. 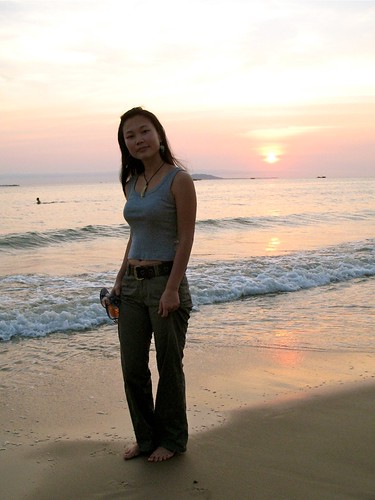 We’ve been to Sanya twice, once as mentioned to get married in ’07, and once as an anniversary/holiday trip in ’09. I really like the place and don’t think I’d have any problems living there, but with a kid in tow, practical considerations need to be heavily weighed.

Haikou, for what it’s worth sounds pretty great. It has some of the best environmental policies and the highest-rated air quality of any Chinese city. It’s new high-speed train makes Sanya’s beaches only 1.5 hours away, and bustling high-tech and tourism industries are helping the city to develop quickly. It also reportedly has a vibrant night-time culture — and man do I miss sitting on the street eating random bits of barbecued animal.

End of the day though, it’s a Chinese city, and I am keeping my expectations well in check. In fact, I’m viewing the move much more as a return to “common” China (trying hard to avoid the term “real” China). Life in Suzhou, specifically Suzhou’s SIP, is not indicative of what life is like in most places in China — even at the 2nd tier city level. I’m surrounded by good foreign restaurants, several foreign supermarkets; I can get an assortment of cheeses, deli meats, Canadian Moosehead beer, tex-mex takeout, my choice of delivery pizza, and an ever-expanding litany of other comfort things from home.

I’ve loved that about where I live. Ironically, it’s like a little island of normalcy in an otherwise challenging place, and I’m sure I would have wanted to head back to Canada long ago had I not found it. I am acutely aware that I’m giving most of that up in this move.

But I think I’m ready for it. What I’ve come to realize is that as much as being comfortable and having conveniences a button push away are great, they also create a lethargy in me. For better or worse, challenges push me to think harder and develop more. While I can’t think of a time in my life I wasn’t trying to make life easier (whether by making more money, living more comfortably, adding security, whatever), I also can’t think of anything I value in my life having come out of comfortable circumstance. Questing for them, perhaps, but once obtained, it all just sort of stales. 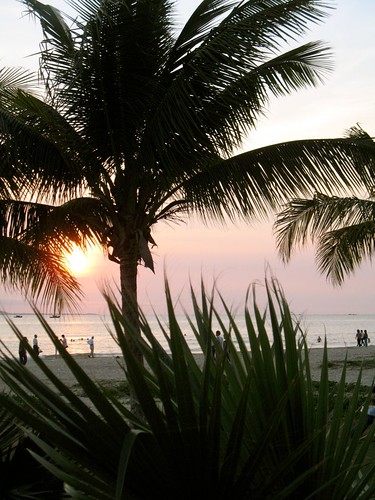 Palms at sunset in Sanya, Hainan

So I’m looking forward to the challenges of living in a new place, meeting new people, and exploring a large chunk of China that until now has escaped my visit. Living on Hainan, I cannot wait to get outdoors and explore the island, but I also cannot wait to use the place as a gateway to other areas in southern China I’ve long wanted to see. Kunming, Guangzhou, Hong Kong, Macau, Guilin and Vietnam are all places I hope to venture to from my new home base.

I’m truly looking forward to feeding my soul with new experiences and re-igniting my passion for the outdoors, travel and for China.

It was that need that brought me to China in the first place, and then, like now, the hardest part in the whole process is leaving friends behind. As an expat, it’s hard to make deep and lasting friendships, as more often than not someone ends up leaving before the relationship has really blossomed. I was lucky here in Suzhou to have made some incredible friends that have not just left me with great memories, but have infused the best parts of themselves into my character and made me a much better person for having known them.

The great part about friendships like that is you know it’s never goodbye, only see you later. And while I know that relationships inevitably suffer from an inverse-square law, I also know that the moment that we again find ourselves in the same place it will be as if little or no time has passed.

And so, in a little more than two weeks we’ll say å†è§ to our life in Suzhou and begin something new in Hainan.