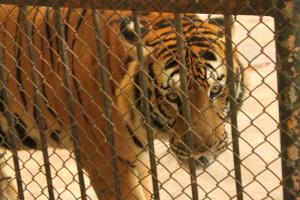 For the last few weeks Maggie’s been suggesting we take Casey to the Haikou zoo. I have deeply mixed feelings about zoos. Like the ROM for history, trips when I was a child to the Toronto Zoo instilled in me a great sense of wonder and a love for animals. On the same coin, I always feel depressed looking at anything confined to a cage — and never is this more so than at Chinese zoos.

If being in the company of wild animals is a gradient; most Western zoos would be further towards “in the wild” and most Chinese zoos would be sitting much nearer the “waiting for slaughter” end of the spectrum.

However, after a very long, hot summer, the weather in Haikou is absolutely beautiful for getting out and doing some site-seeing. Conjuring up just enough cultural relativism to tuck away my misgivings and not ruin our son’s first trip to a zoo, we headed out.

The Haikou zoo is located in Golden Bull Mountain Park (é‡‘ç‰›å²­å…¬å›­ï¼‰Haikou’s largest park, pretty much dead-centre in the city. The entrance fee was 25RMB for adults and 10RMB for kids over 1.2m.

I’ve been to three zoos in my time in China: one in Jinzhou, a very small town that is essentially a suburb of Dalian; the Dalian Forest Zoo; and the Northeast Tiger Forest Park in Haerbin. The Jinzhou zoo was about what you’d expect for a 1RMB zoo in the corner of a small town’s central park. They had some shaggy camels, a bunch of hungry monkeys and one old sad-looking bear, which many years before had gotten loose and killed its keeper (but for a small zoo, apparently it was too valuable to euthanize). The Dalian Forest Zoo was actually pretty decent, and the tiger park was sad but impressive (watching a group of tigers take down a cow is something I’ll not soon forget).

The Haikou zoo fits somewhere between the Jinzhou zoo and the Dalian Forest Zoo. I was happy Casey had the opportunity to see these animals up close (though he was more interested in throwing leaves in the fish pond than marveling at the tigers), but it wasn’t without its sad moments. Sad as in, “awe *tear*” and sad as in “did you really stuff your dead giraffe rather than acquire a new one?”

Yep. The giraffe exhibit featured one large, semi-encased stuffed giraffe. Other surreal moments of the trip were seeing an exhibit of chickens and one of dogs. I kid you not, caged up in between monkeys were a random assortment of dogs (a pair of spaniels, two dalmatians, a German shepherd and a couple others). It’s weird, and maybe it’s because most of the more exotic animals I’ve only ever seen in cages, but seeing the dogs there was the most despairing bit of the day. It’s been pointed out to me that this is actually pretty common in Chinese zoos — even the Shanghai zoo features dogs.

Watching the monkey’s play in their big enclosure was entertaining. I’m not entirely sure why some monkeys got to play in a big “yard” (with stuff to swing on) and some were stuck in little cages. And while sobering to watch, being only a few feet from an absolutely massive tiger got my blood pumping. I will give that to Chinese zoos, they allow you a dangerous amount of proximity to the animals. The zoo also has a (pair?) of tiger cubs born last spring. We didn’t get much of a view of them, other than to glimpse one loudly grunting while chewing on a bone as a somewhat nervous-looking girl cleaned its cage.

I think it’s obvious from my description that I’m a bit torn in my feelings of the day. It was great to get out, great to show Casey animals he had until now only seen in animated form, and great to dust off my camera. Chinese zoos, however, make it tough to forget where most animals sit in the scheme of things here in China.

Here’s a partial collection of the animals. Notably missing are the hippo and the jaguar — neither were overly cooperative in getting their photo taken — and the snakes/crocodiles, as you had to pay extra to see them. From the entrance of the reptile area, all I could see were cages of chicks and bunnies. We assumed that would be a pretty quick way to ruin Casey’s zoo experience.