I may be a lot of things, but someone who can keep their mouth shut is not one of them. This blog is a testament to the fact that I am completely under-skilled in respecting the sanctity of privacy in my personal life. For years now I’ve blogged the smallest and largest moments of my life with little attention paid to any sort of filter. Largely, that’s just who I am.

However, in recent months, and much to the contrary of years past, I’ve found it harder and harder to share much personal. I hadn’t given much thought as to why, and assumed it was just because I’m busy. But I now wonder if it might have something to do with what I’m about to write.

Maggie’s pregnant and I’m going to be a dad!

Let me just repeat that… Maggie’s pregnant and I’m going to be a dad!

And with that, let me fill in a bit of back story. A few months ago now Maggie and I decided that we would start down the road to having our first child and beginning our family. We started talking to friends about their experiences and reading books on conception — I had thought it was a lot less complicated than it is. For instance, I was surprised to learn that there’s only about 40 days a year the average woman can get pregnant — or only about a 10% chance per month — being 16 and drunk seems to up the odds.

Anyway, with slightly more baby-makin’ education than my middle school’s “insert tab A into slot B” instructions, we set to it (snicker snicker). After no joy the first month of “trying” (a euphemism that I plan to continue using long after we’ve stopped trying to get knocked up), at the end of August Maggie’s pee delivered the best message urine has ever given me. She was pregnant. 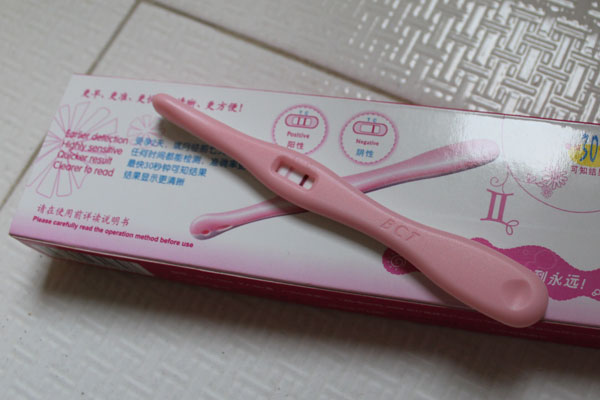 As you can see from the picture to the right, the second line wasn’t reassuringly strong. The box indicated that while no second line didn’t necessarily mean “not pregnant”, even a faint second line meant “baby”. To confirm things, we headed down to the hospital and re-did the urine test and also got a blood test. She was definitely pregnant.

We had already told most of our family and friends that we were trying, and so were bursting a bit to let them all know the good news, despite us both knowing full well the percentage of pregnancies that miscarry. The miscarriage rate was really the biggest reason I didn’t want to announce it too early here.

At seven weeks we headed back down to the hospital for our first ultrasound. Most literature says that an ultrasound should be able to distinguish a heartbeat in the embryo between 6 and 6.5 weeks. There was no heartbeat. Like a cold slap our hopes dropped a few notches and we began to assume the worse.

The doctor told us that it was still early, and that we should come back in a week or two and check again. That led us into our recent trip up to Dalian, and then this past week’s National Holiday. Though impatient to know one way or the other whether everything was alright, we assumed a bit of extra time could only make the results more definite.

And so this morning, at 10 weeks into the pregnancy, we returned to the hospital and had our second ultrasound, which showed a perfectly healthy peanut-shaped smudge complete with heartbeat. A good thing too, as I’m not sure what Maggie would have done had she been suffering through rather harsh all-day “morning” sickness these last few weeks for nothing.

Now it’s real. Despite having planned this, and known about it for more than a month, today it’s really begun to stick. Maggie’s pregnant, and I’m going to be a dad. I feel like I’ve been holding my breath since we began this journey, and while tomorrow I’ll start holding it again, today… well… today I just simply can’t hold my breath, the smile on my face just won’t let me.