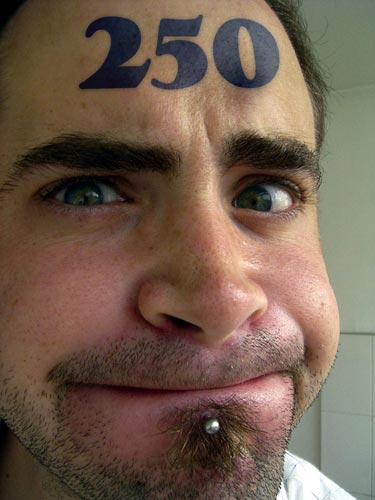 Since arriving in China there has been one answer that I’ve quested for more than any other. Weeks into living here, I was given precious information that would leave me ‘in the know’ many times during my stay in China.

It was whispered to me in the busy halls of a Dalian Carrefour supermarket by a giggly and slightly shy Chinese woman. I was told never to use it, but that I should know it incase someone used it against me.

It was, if the picture didn’t give it away, Er Bai Wu (äºŒç™¾äº”) — or 250. Seems innocent enough, doesn’t it? Just sitting there between 249 and 251… nothing overly special about it. The pronunciation in Chinese doesn’t have any goofy homonyms, the numbers aren’t (in and of themselves) unlucky or what not, so why oh why if you use 250 in anyway with someone Chinese, is it the equivalent of calling them ‘stupid’?

This is wide-spread enough that if your purchase is 250 yuan, it will often be rounded down or up to avoid the possibility of the patron thinking the shop is calling them an idiot.

This odd way to insult someone baffled me, and so I began asking Chinese friends and co-workers (and eventually anyone I happened by) what the hell the reason behind it was. I got a lot of half-assed responses, but they always ended with “nah, I’m not really sure. Maybe nobody knows.”

I was starting to believe this until last night, when with a sly smile Maggie turned to me and said, “Hey, I finally found out where the whole erbaiwu thing comes from.”

She stumbled upon two explanations online, but as the first was some boring story relating to a Hong Kong card game — she nixed that and fed me the cool “long, long ago” version.

… Long, long ago during the Waring States Period (475-221 BCE) there was a well-respected, and rather wealthy ambassador named SuQin (è‹ç§¦) who travelled throughout the kingdoms of China delivering messages between emperors and such. Though generally liked, he had some enemies, and upon entering the Kingdom of Qi (modern day Shandong) some thugs killed him.

The Emperor of Qi was really pissed off, as SuQin was a friend of his court. He laboured to find a way he could discover the killer and then had an idea that I’m sure made him feel royally proud of himself. He cut off SuQin’s head and placed it on the capital’s main gate with a sign that said: “One Thousand Gold To The Killer Of This Enemy of Qi!”

A greedy bunch the Qi were, and four guys instead of one showed up to claim the reward. With a dilemma of who to hold responsible, the Emperor asked the men how he should divide the reward. They all agreed it should be split four ways — 250 each. So, the Emperor decreed (c’mon, how often do you get to write that word?) that the punishment be given to all four and informed his guards to:

Alright, maybe I’m just a big 250 for believing such a goofy tale … but leave me be, no longer do I need to keep searching for that most elusive answer. Also, like the Cultural Revolution, that day in Tiananmen, and Mao’s body; it gives me a bit of knowledge about this country that most Chinese don’t know – and I can hold it over them and gloat. Hey, I never said I wasn’t petty.