So, it’s my birthday — and shaping up to be one of the best ones I’ve had in years. As mentioned in the previous post, my best friend Cory arrives from Canada today for his first visit to China.

I leave in a couple hours to grab the shuttle from Suzhou to the Shanghai Pudong airport where I’ll collect what is sure to be a slightly achy and jet lagged version of my friend. I’m super excited. Of course because it’s been a year and a half since I’ve seen my friend, but I think the excitement has much more to do with the anticipation of sharing a part of my life that despite being friends for nearly 20 years, he’s virtually unaware of.

Much like when I brought Maggie home to Canada the Christmas after we got married, it was great for her to meet the parts of my family she hadn’t met, and it was good to visit home — but the most interesting part was sharing with her a whole side of my life that she had never experienced. She only knew “Ryan in China”, and had never met “Ryan in Canada” – his friends, his hometown, his memories, etc. 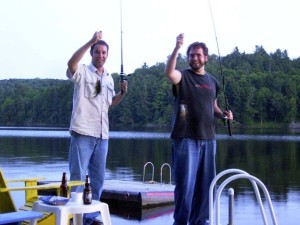 Cory and I up at his cottage in 2004, the summer before I left for China. The fish were small, but the beer helped.

But since moving to China in 2005 our paths have run further and further apart. While four and a half years is a relatively short period of time, it’s caused me to miss out on a lot of things back home, and caused the people I care about back home to miss out on a lot of things in my life. As much as I do my best to stay in touch and keep up with what is going on, the pictures people paint for me become less and less vivid until they resemble little more than bullet points in an e-mail, and not the life-affecting changes that they actually are.

As much as I “know” life is moving on steadily without me back home, it isn’t “real” to me in a physical sense. And I imagine it is much the same for my friends and family back home with my life here. They all know I live in China, and presumably have some sort of life here; but I am guessing it doesn’t really exist for most of them because they’ve not seen it and been apart of that story themselves.

That’s really what it comes down to, and why this birthday is more exciting than any I’ve had recently — I’m extremely excited to have such an integral character in my story back in the plot — if even just for a couple weeks.