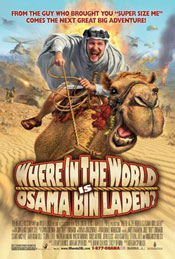 The Costello hit that plays as the credits roll to “Where in the World is Osama Bin Laden?” is pretty aptly answered in the latest doc(me)mentary by “Super Size Me” director Morgan Spurlock.

As with his breakthrough film, “Where in the World is Osama Bin Laden?” follows Spurlock’s personal journey to dig around an issue that has been ingrained in the collective consciousness of North Americans, but that very few people devote any real thought to.

Also like his first documentary, this film offers up all of Spurlock’s goofy animations, simplified explanations and common-man commentary – plus it’s got a kickass Mortal Kombat style video game face-off between Spurlock and bin Laden.

I really liked it. I’m a fan of Spurlock largely because, unlike the overly presumptuous and incendiary documentarian style of his contemporary Michael Moore, I feel his method of “I don’t know, so I’m going to go take a look” brings the watcher a lot closer to the subject matter.

Whereas Moore’s films make you feel like he, and only he, is revealing some great conspiracy to you, Spurlock seems to put a lot more of the responsibility on the shoulders of the viewers to educate themselves and make their own decisions.

“Where in the World is Osama Bin Laden” Trailer

“Where in the World is Osama Bin Laden” follows Spurlock as he travels to Egypt, Morocco, Israel/West Bank, Saudi Arabia, Afghanistan and Pakistan in a bit of a mock attempt to find Osama Bin Laden. Of course, American’s #1 most wanted is never found, but that wasn’t the point, was it.

The journey shows his target audience, your average American, that despite the fear that the likes of CNN and Fox News instill in us all about the Muslim world, we all want peace, love and understanding.

It also helps illustrate, in a much more constructive manner than blowing up a bus of innocent people, the seminal causes that lead to terrorism – namely poverty, government corruption and malicious foreign intervention.

Like Spurlock’s fantastic TV show “30 Days”, “Where in the World is Osama Bin Laden?” isn’t meant to give all the answers and come out with a neatly packaged solution. It’s meant to raise questions and make people consider their preconceived notions about things.

I read the AP review by Christy Lemire of the movie and gotta say, she’s a bit lame in her analysis – essentially scolding Spurlock for making the movie on the grounds that it took him away from Alex, his pregnant wife, for so many months. Seems pretty weak to criticize a movie on the premise of a personal matter between the director and his wife, no?

I think Lemire’s argument is that it’s stupid for Spurlock to travel to these places and put himself in harm’s way for no “real” purpose – an argument that she might be better directing towards the largely US military forces in Afghanistan and Iraq.

Ultimately, in my opinion, “Where in the World is Osama Bin Laden?” succeeds at doing what it set out to – paint the Muslim world with a bigger brush. Somewhat ironically, the only time Spurlock seemed to actually be in physical danger was when he tried to interview some Israelis. Them old Jews like to push.

The movie doesn’t presume to give answers to the problems in the Middle East, but it does make clear that the last thing the people of these countries want is a larger foreign military presence there. As simple and straight-forward as that seems, that’s most certainly not the way things are going.

So Elvis, what’s so funny about peace, love and understanding? Our inability as members of some of the richest nations in the world to not encourage and spread those three simple principles, but instead promote (both internationally and domestically) war, hate and ignorance – well, how can you not laugh at that?

If you want to watch “Where in the World is Osama Bin Laden?”, you can download the torrent here, and you’ll also need the subtitle file from here (just slap it in the directory where the movie is). Or, if you live in a country that you can rent and buy it – you should do that.